No work today, not scheduled, but rain is... again.  After today, we're supposed to dry out.  We need a little time for the grass to grow.  Temperature wise, we're forecast to top off at 50 (F).  This is definitely sweatshirt weather.

Yesterday:  Boring.  People were walking around in the store wearing coats and, of course, I was sitting here is a short sleeve shirt.  One of the really bad things about this 'remodel' taking place in the flooring department is that customers will ask for a product that has been moved to some unknown location.  We have lots of empty racking.  And how long is this disruption going to last?  Right now they're planning on being finished the week before Black Friday, which is what?  7 weeks away?

The plumber is coming today for my water hook-up.  That sounds a bit kinky, doesn't it.  The last time the plumber was here it cost me $1700, this expense will be much cheaper.  The electrician is going to costlier, ;but then, once he's done, I'll be set.  I'm estimating the new washer and dryer should be hear before Christmas.  I will be buying them from the store.  I tell people, if you need a new appliance, wait until the Black Friday sales.  Those are the best sales of the year.

One thing I've noticed in the transferal of my slides to jpegs is that the photos stand up a lot better than those printed on paper.  Take this picture of me standing on the bow of the USS Albert David, a destroyer.  It could have been taken yesterday, rather than 49 years ago.  I spent some time on the Albert David in order to experience life on a destroyer.  The aircraft carrier behind me?  That's my ship.  The Connie.  If you blow up the picture, you can see a helicopter taking off from the flight deck. 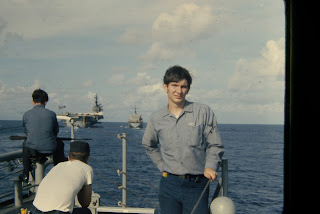 Any guesses as to how long Liz Truss will remain Prime Minister?  I'm suspecting not too long.  She's a conservative, that means in her mind the only way to fix a failing economy is by giving the wealthy a tax break, which she did.  Holy Freaking Ouch!  Boy, did the British economic elevator drop.  And, sadly for Liz, because she's a conservative, the tax break card is the only one she has to play.
Oh, and Donald J. is suing CNN for defamation of character.  Stop Laughing!  Now.  I understand he's also planning on suing the January 6 committed for the same thing.  There are other groups on his list, too, though I won't mention them because... well, the absurdity is amazing.  His base will eat this shit up, providing his ego with a boost.  This is really just an attempt by him to change the facts, to say CNN has lied about everything.  This will fail.  Remember, everything he touches dies.
Finally, news broke that Hershel Walker paid for one of his girlfriend's to get an abortion.  Prepare yourselves for a word salad from hell... with absolutely no dressing.