The Return of Covid

Don't you just love the beginning of a new work week?  I do, but then I'm only scheduled to work for 5 hours today, and then I'm off until Saturday.  I like schedules where I'm off for 4 or 5 days in a row.

Pronto Plumbing is coming back out tomorrow morning because... there's a Leak in the drain.  And not a tiny one.  Water drips through my kitchen ceiling.  And not just the occasional drip.  It's fairly constant when I turn on the bathroom faucet.  I'm suspecting that when the original drain pipe was cut, damage was done to the piping under the bathroom floor.  We shall see.  For the time being, I'm not using the bathroom sink.

Yesterday work was slow up until football started, then the store died.  I did end up getting 2 measures, which means I met my goal.  One of the measures that the 'new' guy has set up was given to me, probably because he's new.

And Covid has reared it's ugly head in the store again.  One of the hardware associates is out with it, as is one of our assistant managers and a flooring aisle associate.  The aisle associated is a 58 year old, unvaccinated Trumpie.  He actually felt that his immune system was special because... well, he thinks he's special.  It's a MAGA thing.  I don't want him to die, but I do hope he gets very ill just so I can chide him when he comes back to work.

Here's another angle of my dahlias.  Love that orange color! 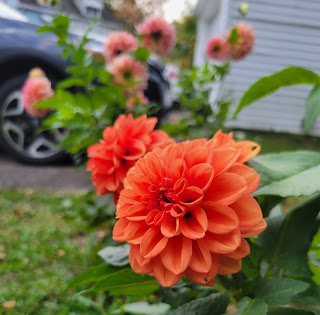 With basically 3 weeks until the elections, there is a Republican media blitz.  I don't know if the Democrats are killing the air space, too, but the GOP seems to be everywhere.  One of the biggest deceits the pushing is that they can fix the economy.  Anybody who's paying any attention to what's going on in the world realizes that's a lie.  Some of the reporting that I'm seeing indicates women, who were so stridently anti-abortion, are leaning Republican simply because of their lies.  They don't realized that the price of gas has been weaponized by both the Saudis and Putin.  They don't realize that even though the American mid-west is called the breadbasket of the world, it is precisely that.  Most of the grain we harvest is exported (just like the oil we pump from the ground) because the growers (and pumpers) make more money doing that then selling it to Americans.  We import many of the grains we use from other countries (that's right).  Countries like the Ukraine.  Republicans are all for this.  For them it's really all about the rich getting richer.