Monday morning and there was frost on my windshield.  Last night was  cool, but not cold, not that I'm worried since I have 2 canine thermal heating units sleeping on the bed.

And I get to work today.  Wow.  6 hours.  But then I am off for 4... days that is, not hours.  They did hire a new flooring specialist who may be... temporary.  Yesterday he show up, but then went home sick showing all the symptoms of Football Sundayitis.  Yes, this gentleman is one of those people.  He's been sort of working at the store for several years.  He was also a Specialist before in Doors and Windows - his performance there was a nonstarter, so they moved him to Electrical, where he performance was that of a nonstarter.  From what I understand, this is his third at bat.  If he strikes out here, he's getting kicked off the team.  We're heading into our slow season, so it's been suggested that this might possibly be the plan.

From my trove of Navy photos:  Snake charmer in Singapore.  Yeah, that is a cobra in the basket.  No, that's not me holding the snake. 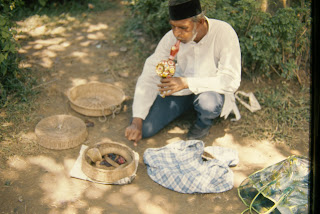 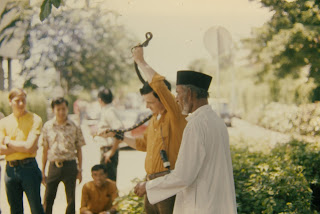 We are less than 30 days till the midterms.  Even Newsweek is (semi) predicting the Democrats will keep control of the Senate, possibly even gaining seats.  Their analyst is blaming the Supreme Court's Roe v Wade decision.  I find it amazing that conservatives are this damn stupid, but then they are the party that so desperately wants to say "shut up, we're in charge," expecting every American to simply say "okay."
Finally, people are talking about this ad which showed up on Craig's List prior to a Trump rally. 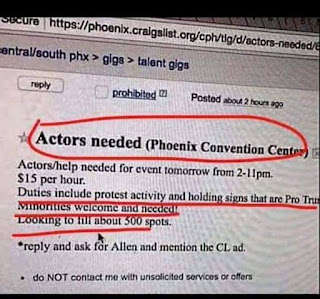 So, I did some research, a little fact checking so to speak, and it turns out that these ads appear on Craig's List frequently before a number of Trump's rallies... and then they're taken down.  Craig's List doesn't verify their validity.  However, when you take into consideration that his venues are getting smaller because attendance appears to be shrinking, this makes sense.  His allies will do anything to fluff his ego.