Saturday for me = work.  Every Saturday.  Keep in mind, that my weekdays are for the most part free.  Tomorrow, I don't work.  I do work on Monday, but then I'm off until Saturday.  I no longer have anything called a weekend.  This is fine.  My hours might increase slightly as we approach Black Friday, but that's a temporary.

Biggie is more active off of his carprofen.  He was on that because it's an anti-inflammatory.  Like humans with arthritis, that inflammation is never going to go away, and it's the inflammation which causes the pain.  Dogs are like small children.  All they know is that it hurts.  The gabapentin's a pain blocker, which is what I'm more concerned about.  Believe me, I had no problem cancelling the refill on his carprofen.

An interesting thing about the cuckoo clock:  both dogs are fascinated by it.  They will stare at it when it cuckoos on the hour.  And when I pull down the heavy metal pine cones to wind it?  They are right there having what seems to be a holy shit moment.  I suspect it's the faint rattling sound of the chains moving over the gears.

I was sitting by Biggie on the writing room sofa yesterday, when Lily dropped the T-Rex she'd had in her mouth and plopped herself down on a cushion in front of us, (cushions never stay where they're placed).  That round, wooden box she seems to be looking at is, indeed, a hat box.  An old hat box.  The writing on the lid dates it to the first Grand Prix in Paris.  That's right, I'm using an antique as a toy box. 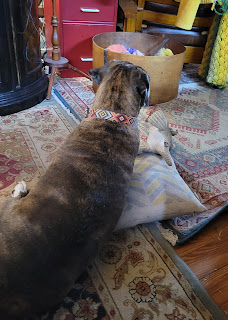 So, I saw where they are hand counting ballots in one Nevada voting district because the Moral Degenerate, also known as the World's Biggest Loser, Donald J. Trump, continues to shriek about voter fraud.  In Arizona, a Federal judge is permitting MAGA dimwits to monitor drop boxes because... you guessed it, many Republicans believe they lost because of voter fraud.  The reality that there are many Americans who don't like their politics, who see them as liars and phonies, is a reality they simply can't grasp.  This demonstrates how poorly they actually fit into society.  What these people want is instant gratification.  They want to win, and they want to win early.  Honestly, I don't doubt for a second that this is how they approach sex.  Hot and now.  Quick, like a bunny, you know?  Premature ejaculations give them everything they want in seconds flat.  Why wait when a wham, bam, thank you man, or mam, satisfies their needs?  I don't doubt that many believe their 2nd amendment rights entitle them to being a quick draw.  Now, I've never read Stormy Daniels' book, so if anyone out there has, does she mention if Trump's a rapid shooter?