The Torment of Trump

This morning I awoke to a drizzle.  This means that forecast with a 98% chance of rain is wrong.  Now, isn't it a good thing I wasn't planning yardwork?

Two days ago, I cut down most of my peach tree in an attempt to get it to grow vertically rather than at an angle.  I used one or two muscles which haven't been used for a while and now my pecs are a little sore.  Damn.  I might need to start going to Planet Fitness again. Here's a picture of what's left.  Looks promising, doesn't it? 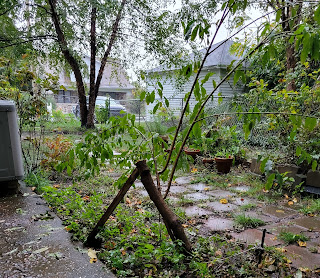 The estimate for the electrical hook-up for the dryer should be arriving by email today.  One thing that will play a part in whether I go with Raddle Electric is that fact that I know the gentleman's aunt.  I work with her, in fact, I may have actually mentioned her before.  She and Biggie are on the same medication.  She and I had an interesting conversation regarding dosages.  Connections like this are important.  While they don't guarantee reliability, they do provide a bit of a testament.

The January 6 committee meets this afternoon, probably for the last time.  Since I'm home, I anticipate on watching it for several reasons:  it will effect Independent voters when the cast their midterm votes, it will make Republican congressmen squirm, and it will once again send Trump over the edge of reality.  Honestly, I always enjoy that, knowing he's hurling bottles of ketchup, and shrieking loudly.  One of the joys of my life is not that man is being tormented.  His Karma demands it.  His lies are wounds on his soul and every truth rubs salt into them.  I cannot think of anything more joyous then to know he is in an almost constant state of rage.  And the fact that his party has tied their fate to his?  Now don't that bring a smile to your face?

As a final footnote for today, it turns out that more Republicans died from Covid than Democrats, and many of the lived in Red States.