Thursday has arrived.  Today and tomorrow, even though the temps have not been cold enough for a frost, are supposed to hit the mid to upper 70s (F).  Translation, Faux Indian Summer.  This is what's been happening over the past few years.  Next week, if the predictions are correct, the temps are supposed to drop into the upper 30s (F).  That's still not quite cold enough.  The sad truth is that after the first frost, our temps might climb into the upper 60s (F) and that would be our Indian Summer.

The plumbers were here yesterday.  $$$  I now have a water hookup for a washer on the 2nd floor.  There were 2 of them and they did not seem to be pressed for time, since they took over 2 hours for what is a rather simple job.  I made a mistake by telling them I could patch whatever holes they deemed necessary, and as a result, they cut a big hole with multiple pieces. 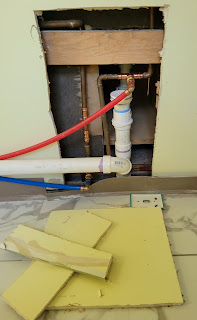 And, for those of you interested, the electrician was just here, the one whose last name sounds like he should be an action hero.  Well, I was slightly off in my prediction.  He was in his late 20s with no kids or grandkids.  There was, as Maddie pointed out, the inevitable butt crack.
As expected, this close to the midterms the Republicans are pumping all sorts of moola moola into negative campaign ads.  This is as certain as birth, death, and taxes, and it is all negative.  In fact, the 2 things Republicans are truly good at are (1) lying, and (2) negative advertising.  This time they are again leaning on their family values, i.e. banning books, attacking Trans people, and immigration, they want you to believe every immigrant coming to this country crosses the boarder carrying 14 pounds of fentanyl.
Finally, the word on the street about Doug Mastriano is that he's a fucking fruit cake, pardon my language.  He already wants his followers to spend the last 40 days until the election by fasting and praying.  He's evidently one of those extremists who has no problem lying because... well, you know... he's doing it for God.  His zealotry has no problem with war as long as it's for God.  Be forewarned, he will not take his approaching loss lightly.  He will create a shit show the likes of which Pennsylvania voters have never seen before.