Well, here we go, another Sunday funday.  For those who don't know, I work almost every Sunday.  This is fine.  The store is usually slow in the afternoon, especially when one of the local teams is playing:  Baltimore, Philly, or Pittsburgh.  Thank you football, a sport which fails to impress me.  A number of years ago, someone associated with 60 Minutes decided that they should do a segment about football, the idea being that if you knew about the game, first downs, goal to go, and shit like that you'd find the sport unbelievably fascinating.  If that were even remotely true, every sport would have zillions of fans.  My theory:  football's popularity has a lot to do with the amount of beer being drunk.  I went to see the Philadelphia Eagles play the team that used to be called the Washington Redskins and the lines to the beer vendors was constant.  After the game, as we were driving out of the parking lot, I reminded our driver that all those drunks are now on the road.

The temps today are supposed to climb into the high 60s (F), and I'm debating whether I should wear a long sleeve shirt to work, or just take a jacket.

This late in the year, it's only my dahlias that are blooming.  I still have roses.  This is the 3rd time they've bloomed this year. 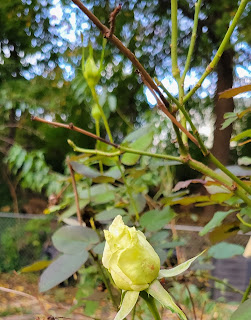 Yesterday was fairly quiet, politically speaking.  Everybody was still a Twitter about Herschel and his badge, and his view that if you eat right you shouldn't need insulin.
Biden's approval rating continues to inch up.  This is good for Democrats and bad for Republicans, who are scared.  How do I know?    Well, when Republicans go negative, they go negative.  They're airing a clip of him standing behind a young girl with his hand on her shoulder.  They, of all people, do love to shovel the shit.  If it weren't for lies, they'd have nothing to hold on to.  When I see them on Twitter, I just give my standard response.  It works so well, believe me.  While some prefer wordy diatribes I like 3 simple words.  Pure Republican horseshit.  Every now and then I use a slight variation, Tom Fitton's Tweets for example.  For him, I always preface those 3 little words with Tommy Traitor's.  He never reads the responses, others do.  All Tommy Traitor, and Ronna McDaniel, and the rest of their Republican ilk care about are retweets. The more retweets they get, the happier they are.  This election season, are job is to make them unhappy.  We want them to lose.