Well, I'm in for a sleepy, rainy Sunday.  The sad thing is that I have wot work.  Son of a bitch.  And I will feel like I need a nap.  For some odd reason, the dogs felt the need for multiple pee breaks last night.  4 or four, if you need it spelled out, the last one at 0445 this morning.  Both of them went out into Ian's drizzles.  And I actually thought it might be a good idea to stay up, but I didn't.  As a result.  I have about an hour and a half until I head off to the store.

And, speaking of the store, I did take a picture of the new and unimproved flooring desk yesterday.  Our style will now be called Cramped.  For those not in the know, like me, this is what they call a mushroom desk.  Two computers back to back, so the specialists face each other.  The flat end at the bottom will be pushed against a wall.  The curvy end at the top?  That's where our customers are supposed to sit, and it's tiny.  When both specialists are talking to customers, those customers are going to be sitting side by side, with about as much distance between themselves as they'd get in a movie theater. 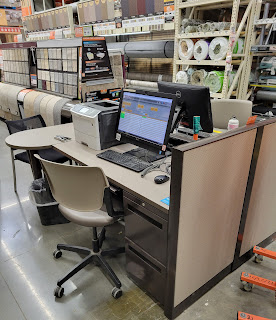 The Supreme Court is set to start hearing cases tomorrow.  Right now their approval rating is sinking like a rock.  They are also set to take on some very high profile cases regarding race and voting.  Should their decisions continue their rightward trend, their approval rating is going to sink.  I actually expect it to plummet.  There is no way anyone of those 4 (four) judges are going to change course.  They are extreme conservatives and the one thing you can count on when it comes to extremists is that their favorite words are "shut up, we're in charge."
There is some concern that Ronnie DeSantis my attempt to delay the November elections.  He'll blame Hurricane Ian.  His shit is not smelling too rosy right now.  Even though the state has a big hurricane target on it's back, the state was not prepared.  Perhaps if he had spent less time grandstanding, less time thinking about his political career, the state might have been better prepared.  The suffering will continue for quite some time.
Posted by Dave R at 8:38 AM