Yesterday was pretty much a kitchen clean-up day.  A lot of attention is being paid to the floor which is vinyl planks over a subfloor of lauan (fiberboard).  Lauan doesn't handle water well.  For those who don't know, this is the same stuff they use in making laminate flooring which handles water quite poorly.  So far, there is no sign of swelling or warping.  Replacing it would be another pain in the ass, added expense.

Since the kitchen is already somewhat torn up, I'm going to ask the electrician how much it would cost to add a couple of outlets.  With coffee makers, and mixers, and toasters, and microwaves, a kitchen needs convenient outlets.  Mine has 2 and only one of those is counter level.

So, I watched the last episode of the Rings of Power last evening.  I was not really surprised by the revelations, but then a long time ago I read through the Silmarillion  upon which much of this series is based.  Things to keep in mind:  these first 8 episodes were only about the Elvan rings, the 5 for the Dwarven kings, and the 9 for man have yet to be forged as does the one to rule them all.  Also, Isildur has not been seen since episode 6 and Durin  was not seen in episode 8; both have major parts to play (that isn't really a spoiler).  Supposedly, season 2 will be out sooner rather than later.

The temps dropped down to 37 (F) last night, not freezing yet.  I managed to snap another pic of my dahlias. 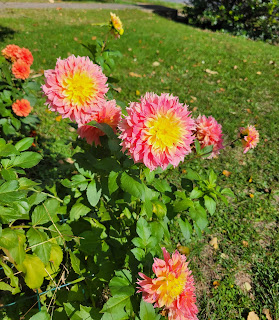 One of the things I find intriguing about the midterms is the large number of election deniers running for office.  Some of them, like Kari Lake, are relying on The Big Lie to get them as many votes as possible.  Even though it's been proven false over and over again, I wonder if these deniers truly believe it, or are merely using it as a tool to leverage MAGA voters.  The lengths to which some are going make me wonder if they have any idea of what might happen should they push it too far.  Take Doug Mastriano in Pennsylvania with his 40 days of prayer.  This man sees nothing wrong with people dying for God, in fact his doctorate which has been deeply criticized for being based on falsehoods, states this is a good thing.  Does this guy really want a religious war in Pennsylvania?  There are so many out there who are fanning the flames without even considering what the terrible consequences would be if people start taking up arms.