The end of September.  The month has past quickly, I think.  Time does seem to move faster as you grow older, but the past 4 weeks were gone in what seemed to be a finger snap.

Yesterday was interesting at work.  The renovation of the flooring department is... major.  So far, I'm not impressed.  Our desk is tiny.  There is no way one associate can design blinds for customers, while another keys in a flooring measure.  The desk was still in the process of being located into its final position.  Pictures tomorrow.

I started watching Andor last night on Disney.  It's okay.  Characters actually said 'bastard' and 'shit.'   There were 3 short episodes which were basically a introductory starter pack.  I will watch future episodes, though this isn't something that has be hanging on the edge of my seat.  Instead of watching each new episode weekly, I'll wait a couple of weeks.

Ian is going to hit South Carolina this afternoon.  For those of you in his path, persevere, his rains will pass.  He will be raining on Central PA tomorrow and Sunday.  With college football on TV on Saturday and Pro football teams playing Sunday, the store will most likely be slow. 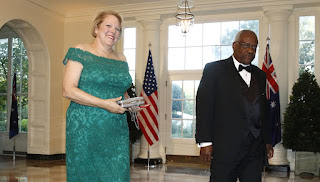 For those of you who don't remember, she was going to set the record straight.  Well, it turns out that Ginni told the committee that she still believes the election was stolen.  She will never change her story.  She also told them she never discussed her political belief with Clarence.  Well, we all know that's horseshit, but then we all need to remember that Ginni's universe is, while seeming large, at least a size 20 +, in reality it is very small.
In fact, her universe is approximately the same size as that of Sammy Alito.  He just spoke his mind in a mini-tirade about the so-called integrity of the Supreme Court.  Sammy is upset that so many people are questioning the legitimacy of the court.  This is because in Sammy's mind, God is behind everything, including McConnell's decision sit on Merrick Garland's nomination, as well his his decision to throw out the filibuster in order to seat Amy Cony Bony.  In Sammy's universe, 1864 was a very good year.
And finally, for those who missed it, Judge Ailleen Cannon has decided that the Special Master her client, Donald Trump, wanted needs to be reigned in.  You see she thought Dearie was going to cozy in with her and the Trump defense team, and he didn't.  Since he didn't, she took matters into her own hands to create a delay.  She also decided that it wasn't really necessary for Trump to prove that the FBI planted the documents he claims to have declassified.  She is the essence of corruption.