The Awareness of a Doorknob

Sshhhh... the dogs are still in bed.  For them this is just another sleepy Sunday morning.  I'll have to head off to work in a little over 3 hours.  Boo.  Hiss.  Of course, they will have done their potty outside and have will have nibbled on their breakfasts before then, just like any other day of the week.  With the sun rising later, however, they are sleeping later, which is fine.  They're dogs.  They have a good life.

A little over 3 years ago I purchased a Mocca Master coffee maker.  4.5 ⭐⭐⭐with over 5000 reviews.  Well, I perhaps should have checked out the .5 that gave it a bad review, I'd have learned something.  Almost every one of them complained about the on / off switch, an issue which reared its tiny head about 2 weeks ago.  Some mornings I need to toggle the switch back and forth to get it to turn on.  The good news is that the on / off switch is really the only thing covered by the warranty.  All I need to do is pay the shipping to San Francisco, $35.92 ground Fed Ex, anything faster I'd need to add an additional $100 to the bill.  Mocca Master would ship it back for free after repairs.  The reality is that it's cheaper to purchase a new coffee maker than have this one fixed, so a new, less expensive Krupps coffee maker arrives today.

It's been over a month since my neighbor's husband died.  The house is still not for sale.  Her daughter thought she could sell it 'as is' to the neighbor across the street.  That fell through.  The daughter wanted him to accept too many exclusions: asbestos, lead paint, possible structural damage to the roof, a whole laundry list of problems she didn't want to deal with.  A house flipper might buy it, but not at her asking price.

Here's a picture of another one of my autumn roses. 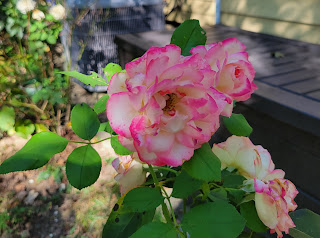 Of course, Trump was in Wilkes-Barre, PA last evening.  I feel really sorry for those who had to listen to him simply to report his insanity.  People are questioning whether he was on drugs, or if this is a more apparent onset of dementia.  The truth is neither, he's has just finally decided to give into his inner insanity.  Reading some of his comments this morning, I realized how he was rapidly filling in every nook and cranny of the fascist mold he so desperately wants to fill.  The most obvious subtitle for his speech can only be "In praise of dictators."  Putin's great.  Xi, from China, is a king.  I don't think he mentioned Kim Dumb Shit or the Saudis, but then I might have missed a name or two.  If you're wondering where the contents are to those 43 empty folders, look no farther than the subjects of his praises.  You see in Trump's mind, he, and Putin, and Xi, are all on the same level, and so he would have no problems sharing secrets with his friends.
Finally, as expected, he did bring up Hillary Clinton and her emails, and right on cue the crowd began chanting "lock her up," at which point on Twitter someone commented that he had the awareness of a doorknob.  He is single-handedly destroying the Republican Party.