So, the Labor Day weekend has ended.  In the 5 hours I worked, the store was had some very busy moments interspersed with nearly empty aisles.  Business trended higher when it was raining, and in case anyone is wondering, we did get rain.  At times torrential downpours made it difficult to see.  This morning I looked out my front window and saw that my lawn had turned from brown to green.

I watched the last 2 episodes of Locke and Key, season 1, last evening and thought the ending was a bit anticlimactic.  I then watched the premier episode of season 2.  Meh.  Most of the 49 minutes was used to explain the ending of season 1.  I've watched other series and this going back to rehash the previous season in order to set up the next season is not good.  The writers seemed to be stretching in the wrong directions to find continuity.  Maybe that's why this is the 3rd and final season.  Or it could be that a minor character in season 1 is now a villain, oh, and she apparently lost about 25 pounds during the filming hiatus and looks completely different.  Or it could be the uncle in season 1, turns out to be gay and is suddenly engaged to a black man who just so happens to be leaving the country to study in Japan.  Or it could be that main villain in season 1 is still around, but in a new face and body.  Oh, shit.

Anyway, I found 2 more pictures of Max Sullivan, the cat.  He lived to be 21, and I took these about a year before he died.  He shrank as he got older and reminded me so much of an old man. 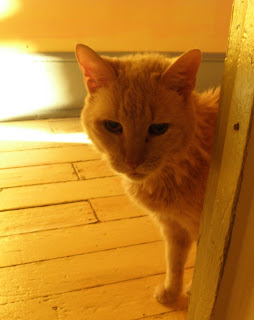 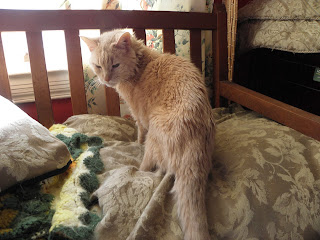 And, of course, yesterday Ailleen Cannon sort of granted Trump's request for a Special Master.  The Dallas Morning News reported that she had said to one of her department attorney's that she didn't see any harm in it.  While not coming as a total surprise to the legal community, many were surprised she chose to take this path.  She is, as one Tristan Snell put it on Twitter, in way over her head, and that she put party over country.  Personally, I don't think she has an idea how doing this is putting fuel on the fire.  No one is suddenly going to feel sorry for Trump.  Quite the opposite.  Anger is continuing to grow at the MAGA claim of a stolen election, at Trump's lies, of his possible use of confidential documents for personal profit and power.  Everyday more people are finding themselves fed up with the Republican Party.  Will judge Cannon's decision do anything other than delay the inevitable?  Absolutely not.  There are too many other ongoing investigations.  No matter how hard they try, they will not be able to stop the clock.  How do I know this?  My brother, a devout Evangelical has quietly told my sister that if Trump were to somehow get nominated again, there is no way he would be able to vote for him.