Blowing the lid off the Cesspool

While yesterday wasn't a complete washout (I did manage to get several loads of laundry done), most of the day was spent in repose.  This is always the case when I binge TV.  The next day is a day of recovery, when I scan for newsbreaks, watch obscure videos on YouTube, and take naps with the dogs.  Inevitably, boredom sends me to bed early and I end up waking up around 0200 because I've had enough sleep for the day.

There is also an 'ongoing problem' with Office 365.  Clicking on the icon gets me a white screen.  In order to get to my files, I need to click on the specific icon in my sidebar.  I was told by a techy that the issue would be resolved within 3 - 5 business days.  I'm suspecting something slipped through their Q&R during a recent update, otherwise this wouldn't be an 'ongoing issue.'

More rain is forecast for today.  Friday I will have to mow the lawn.

And I have this vine growing along the fence.  I have no idea what it is.  There is a nice fragrance, and the flowers are pretty.  I don't think it's a weed.  If anyone knows what it is, please let me know. 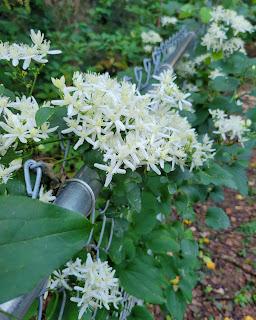 Of course, there was so much negative Trump shit floating to the surface yesterday, starting in the afternoon with Billy Barr's attack on Ailleen Cannon's decision to permit a Special Master to review the documents taken by the FBI.  Seriously flawed, I believe is what he called it.  Now, I don't really care for Billy that much, and I'm wondering if his sudden change of heart regarding Trump might be the fact that he's suddenly realized that saving his own skin has become more important than saving Trump's/
That shit was still getting a lot of attention when all of a sudden, the Washington Post dropped a bombshell.  One of the documents confiscated had to do with a specific country's nuclear capabilities.  Yep, the Washington Post just blew the lid off the cesspool.  Many sharp minds are suspecting that country might just be Israel, since the Saudi's did pay Jared Kushner that $2 billion for consultation services.
Now even more sharper minds are looking at judge Cannon's decision and muttering about favoritism.
And then later last evening news broke that Steve Bannon's going to be indicted and will be turning himself in on Thursday:  stealing money from MGAGs for that fake save the wall fund.  This most likely means more jail time on top of the time he'll spend in jail for not responding to the January 6 subpoena.  You just can make this amount of stupid up, can you.