Biggie loves this weather, too.  Three gabapentin every 12 hours are working magic.  I understand the med is a pain blocker, keeping the nerve impulses from reaching the brain, and not an anti-inflammatory.  His carprofen take care of the inflammation cause by his arthritis.

For those who haven't heard, Sixpence is having some issues with Blogger, evidently there is a threat to shut down his blog because of what he calls the 'little collages' he's taken from Instagram.  The first thing that went through my head was that one the artists he likes has decided to claim copyright infringement.  Just because something is published on Instagram does not mean it's in the public domain.  Many artists are very big on licensing agreements.  They don't care if you publish their work as long as they're getting paid.

And, in case any of you are wondering, I do know a little about artists.  For a number of years I hung out with several.  They're odd people.  Since they make their living by selling their art, many are focused on the money aspects of their business.  Here's a piece by Lawrence Von Barann.  I was hoping Larry would leave me a piece in his will.  He didn't.  If you're interested, you can buy this from the Yale Gallery of Art.  For those who are wondering, the answer is yes, that is Yale University. 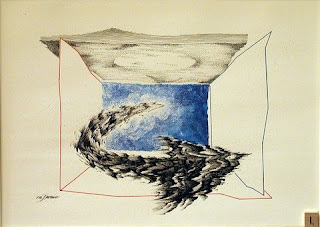 And, not surprising, there were more guilty pleas In the North Carolina election fraud case.  Republicans, of course.  Isn't it fascinating how the group that shrieks the loudest is responsible for the most problems?

It's also fascinating that Republican Adam Kinzinger is beginning to advocate for people to not vote Republican.  As he says, "they will try and impeach Biden every other week."  That is not some mindless assumption on his part.  Just like the Orange Anus, the Republican party focuses on revenge.  Conservatives have always been terrible losers.  The idea that the beliefs they hold as intrinsically true are rejected by a majority cuts them to the core.  They simply cannot comprehend how they can be so wrong.