Whether you like it or not, the new week started a little over 7 hours ago EST.  In a little over 2 hours, I will be sitting behind the flooring desk for a fun filled day.  One of my tasks today will be to call what are called Zero-comms.  These are customers who set up a measure through our website.  I suspect sometimes they set these measures up after a little too much vino, or after they've popped the top on the 4th brewskie, but then maybe I'm wrong.  I say this because the quotes they get tend to be rather exorbitant, quite often around $9 or $10 thousand.  These people never purchase the installation, still, as flooring specialists we will call them.  Management calls this due diligence.  I call it a waste of time.

Biggie is still in bed.  His back end was really wobbly when I got home from work yesterday; too much running around on Saturday when my neighbor and her kids were putzing around her house.  Now, just like humans, I suspect he's sore for simply over doing it.

And, after my tub picture, I figured I should make sure that you understand I did not spend all of my younger years lollygagging around in a bathtub.  Sometimes I was a cowboy.  What a shame this picture is in black and white, both my little boots and my hat were red. 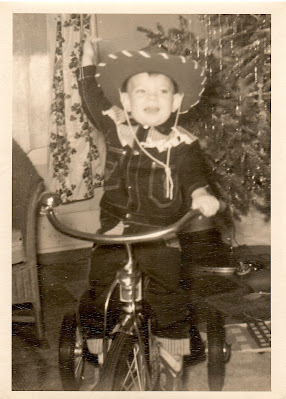 For those who didn't know, Trump quietly arrived at Dulles airport in Washington DC early last evening.  The Twitterverse exploded with speculation.  I had no idea so many people who hated him, tracked his every movement.  This was after approximately 20 hours of being silent on Truth Social, his chat site which will soon be going into bankruptcy.  There were pictures; I'm not posting any.  But I can tell you, his hair was not sprayed down, he was wearing white shoes, either sneakers or golf shoes, and had a gray coat draped over his shoulders.  Oh, and the small jet he arrived in was a rental.  As I said, speculation was all over the map.  There is a feeling in the air that something is going on.  It could be a routine trip to Walter Reed, or something more important.  We shall have to wait and see.