Outside, the temp is a cool 52 (F) and it's breezy.  Autumn has definitely arrived. Today's high is supposed to reach 65 (F).  That's unusually chilly for this time of year.  For the rest of the week they're predicting a more normal mid 70s range for day time highs.  Nights, though, the temps will be dropping down into the high 40s and low 50s.  Time to pull out the wooly blankets.

Yesterday was very slow at work.  I did sell some expensive blinds to a very nice Asian woman.  My manager stopped by the flooring desk and told me he wanted me to push 'credit.'  As I've said before, if someone asks, I'll sign them up for a card.  If they don't, that's fine.  Corporate wants us to believe that people with one of our credit cards will spend more money.  That's not true.  Most of our customers already have credit cards.  With some, this may be true, but most people I deal with watch their credit.

Also, yesterday, because this is our Success Sharing weekend, food was provided:  Breakfast all Day.  Meh.  Now, don't get me wrong, I like breakfast, but I'm not one of those who delight in getting to eat breakfast at one in the afternoon.  Tomorrow is ice cream and Blizzard day.  Now, that's what I call a treat!  I'm going down to York for lunch with my friend Betsy on Sunday and we always stop at Dairy Queen.  So the question is will I be blessed with Blizzards 2 days in a row, or will tomorrow's Blizzard be knock off? 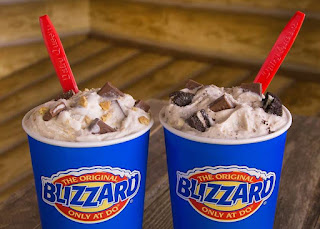 And, of course, yesterday social media was a mock of Trump saying you can declassify documents simply by just thinking about it.  What a hoot!  Now, I know there are those out there clutching their pearls and shrieking, "they need to arrest him now," but admit it, this is rather amusing.  I actually was responsible for several loud guffaws from people's comments.  I'm also laughing at the GOP, who are trying to push a phony agenda heading into the midterms and nobody but the cultists are paying any attention.
Honestly, I even watched some clips of his Sean Hannity interview as have, I presume, some of you.  There's no avoiding them, really.  So, while Kevin McCarthy goes to Pittsburgh to lie about what the Republicans are going to do should they take back the House and Senate, most people are still laughing at Trump.  When he said that "the FBI raid at Mar a Lago was so intense, they might actually have been searching for Hillary's emails," I suffered through a mini laugh riot.  While his cultists eat  this shit up, a vast majority of the American population had a 'what the fuck' moment.  So, while Kevin's trying to talk up a nonexistent Republican agenda, most of the reporters there are going to be waiting to ask him if he believed the FBI was, indeed, possibly searching for Hillary's emails.