Well, if you're living in Florida, today is going to be Wet Wednesday.  Tomorrow, too.  Up here in Central Pa, this morning was the briskest so far.  A chilly 47 (F).  Our high today might reach 66 (F).  And, right now, the dogs are still sleeping.  Not me, of course.  I already have a load of laundry in the washer.

Later this morning, I have a dental appointment.  There was a time when I had my teeth cleaned professionally twice a year.  As I get older, that's dropped down to one single visit.  I have no problem with that.  My dentist will, as usual, talk to me about having two crowns and a bridge installed in my mouth.  At my age?  That ain't gonna happen.

Yesterday, Ronnie DeSantis had an excuse of a presser to tell the world things were moving well ahead of Ian, making sure to emphasize that Biden hadn't talked to him.  At that time, Ian was expected to weaken.  That smarmy assed loser should have realized Ian had something else in mind.  Overnight Ian has strengthen to a very strong Category 4 (nearly a Category 5) hurricane.  The current forecast has him smashing into the state south of low lying Tampa and then slowly heading north through the center of the state.  Suddenly, this morning Ronnie had praise for the White House.  The fact that Ian might possibly tear Florida in half probably has a lot to do with his change of attitude.  Three hours ago, he had a sustained wind speed of 155 mph.  There go the mobile home parks. 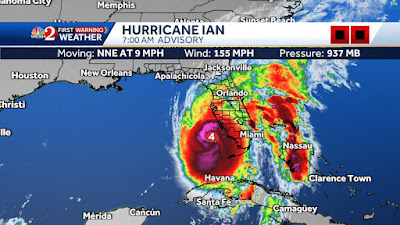 For those who didn't catch it, Frankie Graham had a meltdown regarding one of his beloved anti-abortion protestors.  You see, this loser was arrested for breaking the law, and Frankie believes Christians are allowed to do that.  The Cracker Jack Crazies are blowing this way up and out of proportion because they believe they are special.  Can you even begin to imagine how frenzied they'll be in November if the Democrats win enough seats in the Senate to bypass the filibuster and pass a women's health care law?  Frankie's brain might just implode.