So, the first thing I did this month was start a list of things needing to be done, including chores not on my normal Friday routine.  Every now and then we need to shake things up.  For those who don't know, things do need to be shaken up, given a rattle and a roll, like sharply snapping fingers rousing us from our too comfortable drowsiness.

Yesterday for was, as far as my supervisors are concerned, rather successful. 2 measures, though one was done using the old system which is being treated more and more like a derelict.  Nothing worth salvaging there, though for old dogs, you know...  Updates are coming fast and none of them are being explained.  Reliable icons are soon to be as obsolete as the carpet carousel every flooring specialist despises.

I watched some of Locke & Key last night.  I'm enjoying it.  Very mysterious.  Murder and mayhem seem to be on the menu.  This is, I believe, it's 3rd and final season.  Doesn't surprise me.  One of the stars is young whose growth and maturity must be creating a serious problem.  Remember the problem Lost in Space had when Will Robinson grew from 4 feet 8 inches, to six feet 2inches? 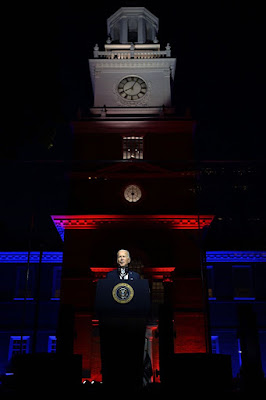 Even the lighting played a part.  Notice how the Red is surrounded by the Blue, for those looking for political imagery.  I like the clock, especially since this was a speech about time, about both the past and the future of our Democracy.  Symbolically, the red is framing not only Biden's anger, but also ours.  In very precise words he called out Trump and his MAGA cult.  He proved that he has no problem pissing on their beliefs. Everything he said was true.  This speech popped.
And for those whiny people who always lament "they always talk, and nothing happens," well, maybe it's time you got off your asses and helped instead of simply waiting for things to be given to you.  Democracy is 'for the people,' and 'by the people.'  Don't expect a free ride.
The reaction by MAGA Republicans was... humorously expected outrage.  They want an apology.  How absurd.  You don't apologize to liars, and charlatans, and grifters, you shut them up and shut them down.