Let the rain begin!  Actually, Lily woke me up around 0300 to go potty outside and the drizzling had already started.  Showers and soaking rains are supposed to continue through Tuesday.  The daily high temp is supposed to crest in the low 70s (F).  Autumn is arriving.

My neighbor was back yesterday with her daughter, and her brothers-in-law.  There was some hammer banging (not much), so I suppose they were fixing the attic stairs so a potential buyer can actually go up to the attic.  I had talked to her on the phone, and she said there was water damage, they thought the leak might be around the dormer. She and her husband bought the place in 1985 and have not replaced the roof, so there are probably several leaks the new owner will need to contend with.  The house is still filled with furniture.  Her daughter told me that in about 2 weeks they were going to have a walk through 'yard sale' hoping to clear some of it out.  They are so naive.

Sometimes I rail against our customers.  Usually, when I do so, there is just cause.  By the same token, we have associates who, for some unknown reason, enable these asshole customers.  Take yesterday.  I went up to the Service Desk to get our returns and found someone had returned 2 white shelf brackets.  However, these brackets were no longer white, they had yellowed with both age and possible cigarette smoke.  That irritated me.  They were evidently past the return date.  But what truly pissed me of was the screw.  Can you see it?  That's how it was returned, with the screw still in it.  What the hell is wrong with people?  This customer definitely wanted to screw us over.  And the clerk who took this return had no problem being screwed. 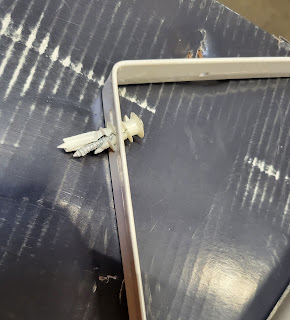 Everybody is waiting for Trump to be indicted.  What I've heard is that it will happen after the election, at least as far as the DOJ's investigation is concerned.  Georgia is another story.  For that case Trump did manage to hire a highfalutin' attorney by the name of Drew Finding.  Expensive.  I hope Drew understands he's never going to be paid for his services.  Mr. Finding also usually defends rappers, though I'm wondering if his style will help him keep Trump from taking the wrap for election interference.  I'm suspecting Trump pretty much screwed himself when he made that call to Ken Rathensburger.  In fact, Georgia may be responsible for several indictments, including one nicely wrapped for Lindsey Graham.  No matter how desperately Lindsey tries to get an NDA from the Georgia Attorney General, it ain't going to happen.  He's going to end up being screwed, too, by Donald Trump.  Of course, maybe that's what he's always dreamed of.