Sunday slow day.  Yesterday was Blizzard day.  That's right.  They bought a large number of DQ Blizzards in various flavors.  Sadly, they were small.  I like my Blizzards big.  Surprisingly, I only had one.  Peanut Butter Cup.  Tiny but tasty.

Otherwise the day was simply boring.  Until 20 minutes before I was due to leave, then I received a call from a customer who is not satisfied.  She is, unfortunately, going to be very disappointed.  She wants us to retile her bathroom... with 6 different types of tiles.  This includes the floor, the walls, a triangular tub, and a separate shower.  She wants a designer bathroom, one with octagonal tiles on a triangular tub.  We could do the installation, however, she wants us to provide her with a quote.  Unfortunately, the software we use does not let us build design quotes.  We install floor tiles, and wall tiles, and tiles in your shower.  If she wants a designer bathroom, she's going to have to pay a designer ($$$), who's going to hire a contractor ($$$), who will be able to build her the designer bathroom of her dreams.

A long time ago, my family owned an AKC Irish Setter my mom named Rusty, his AKC name was Sir Rusty of Fairview.  Setters have long hair, which clumps up into little ice balls between their toes when they go out in the snow.  My mom's solution was to tie white, plastic garbage bags on Rusty's legs.  He was quite patient throughout the process. 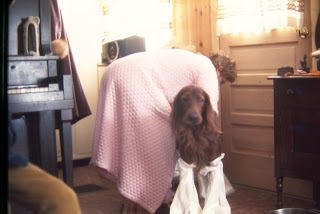 I know some are upset that things are not moving fast enough with all of the Trump investigations, and I do try and temper their enthusiasm.  Patience is a virtue, especially in regard to #45.  He is a slimy sack of shit who has learned to manipulate the system over the years.  Can you even imagine the anger if he should be indicted, only to have the indictment thrown out because some one person in the DOJ, or working with the Fulton County Attorney General forgot to dot the 'i' or cross the 't'?  The MAGAs would go into rapture.  We need to let the process work.  Take the Special Master, who seems to be completely opposed to Trump's manipulations of the Justice system.  He smacked back Aileen Cannon, proving publicly how big of a fool she is.  But it takes time.  There may not be an indictment before the midterms, but I'm suspecting possibly one, maybe 2 public announcements to thrash both Trump and the GOP.  And, of course, there is the approaching October Surprise.  An indictment of... say, Giuliani  would really rattle Trump's cage.