I woke up this morning to the scent of skunk.  What a way to begin Monday, a work week in which I'll be spending over 32 hours at the store.

Update on the associate whose hours I'm covering (slightly).  He didn't fall through a roof; he fell off the roof of a ranch house (his son said 9 feet).  His nose was cut (left side) and stitched, and he broke his shoulder.  He'll most likely be back at work next week, but he won't be hoisting any cases of tile for the next few months.

Update on my neighbor's wife:  she came home yesterday afternoon.  I didn't run over and talk to her.  We were never that close.  She wants to sell the house, but I've been seen how fully the dining room is packed with... stuff.  Unless she pays someone to come in and haul it away, it's not something that's going to happen in the next week or so.

I worked 8 hours yesterday, and believe me, they were a very long hour.  I talked to a couple about blinds.  I did get 2 measurements and a lead on a curtain installation.  No, we don't install curtains or drapes.  We sign people up for a consultation with Kirsch, a company that handles 'window dressings.'

My late summer roses are beginning to bloom. 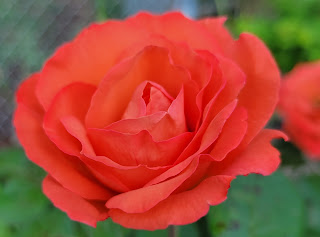 And yesterday was a good day for Democracy.  Major legislation was passed.  The Republicans hate it.  This bristles them down to the core of their gill slits, not that Republicans actually have gill slits... but then they just might.  Isn't this what happens when a species gives up mouth breathing for bottom feeding?
Of course, the Republicans voted down a cap on insulin.  They blamed it on a technicality.  The cap couldn't be included with the regular package and so, rather than do something good for diabetic Americans, they offered them as a sacrifice to big Pharma.  They prefer to have people suffer than give the Democrats anything that might be considered a win.
And finally... A Cracker Jack Crazy church in Dallas is in some serious legal trouble by not only performing an unauthorized performance of Hamilton, but they're also under fire making other changes in the script.  For example, Hamilton is 'saved' and becomes a Christian before his death.  They also did a number of other changes to the script making the show anti-LGBTQ.  They also added a sermon at the end.  Oh, and not surprisingly, most of the cast is white.