Can we get a nice 'hello' for Sunday morning?  Unlike many of you, I did not sleep in, though the dogs are still lazing away.  When I walked into the bedroom to pull open the drapes, I got one of their 'it's 6 AM on Sunday morning, why are you up so early' looks.

My neighbor's 2 children and their families were here yesterday to help her pack up and clear things out, at least that's what I thought they were going to be doing.  I stayed out of their way.  I avoid intruding into the personal issues of others.  Dirty Dawg showed up to give her an estimate for emptying the house.  She's going to throw everything she doesn't want away.  Dirty Dawg is expensive, I used them to clean out my mom's things from the senior living facility.  In the end, they packed up the belongings she wants to keep and drove off.  Her plan is to sell the house as soon as possible, which means dirt cheap, and move into an assisted living facility near her daughter.  However, there are problems with the house.  Nothing was done in the form of upkeep.  Whereas I have a full basement, she has a partial basement, with half of it being no more than a crawl space, and both basements get water.  The future will be interesting.

My neighbor across the street did give me some good news yesterday regarding my elephant ear plant.  She grows them, too, though she keeps her in pots on the side of her patio.  She told me to just chop off the top in the fall.  They winter well in Central PA.  That's what she does, and her pots stay outside year-round. 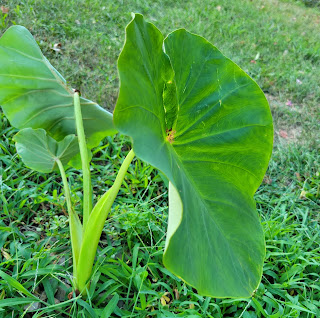 And I see that Rand Paul wants to repeal the Espionage Act now that his false god has been busted... or is in the process of being busted.  Does a day go by when he doesn't prove himself to be an asshole?  But then he so desperately wants the MAGA voters to like him and vote for him, so he'll do and say whatever it takes to earn their votes.
Yesterday, the Orange Anus brought doubled back on his claim that the documents found at Mar a Lago are part of a political witch hunt.  Oh, and they're also a hoax.  Witch hunts and hoaxes.  This was to be expected.  They are his 'go to' complaints.  His MAGA base eats those 2 words up with a spoon.  He also jibbereshed something about how they should always count on him to tell the Truth.  Yep, he said that.  Keep in mind, many members of his cult believe him to be 'brash.' They will tell you that he doesn't lie.  Every word popping out of his mouth is verifiable.  The Truth.  Of course, their definition of truth has nothing to do with honesty.