We're have a mini heatwave here in Central PA.  The temps, predicted to reach the mid 80s (F) yesterday, actually topped off in the 90s (F).  And I mowed my lawn.  There's not a lot of humidity, though, as my friend Tami likes to say, I was 'glowing' with a nice sheen of perspiration by the time I finished.
Yesterday was busy.  Besides the mowing, I picked up Seig's gabapentin, stopped by the store to buy a container for mixing thin set, prepped the wall behind the stove for tiling, did laundry, wrote almost 1000 words (wow), and beat a boss in Elden Ring.
Today might be just as busy.  I'm going to see if I can squeeze a ride in on the bicycle later this afternoon.
My new clock will be arriving later this morning, or early afternoon.  I can't wait.  I didn't realize, until after the old one broke, how often I relied upon it.  The last one chimed on the half hour and hour, the new one does quarter hours, too.
I don't know if any of you are following the Fetterman / Oz race to replace that scumbag Pat Toomey in the Senate, but it is fascinating to see how easily a strong Democrat can dismantle his Republican opponent... use honesty.  This is why Republicans are scared shitless they're going to lose PA 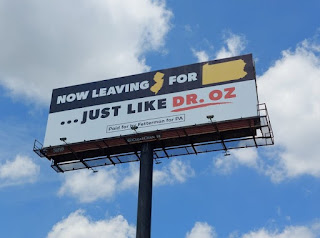 And, of course, there were primaries yesterday in several states.  In some states, Trump back Republicans won, however, not one of them had a landslide win.  They won by getting 46% of the vote (Kari Lake in Arizona), or 41% (Tudor Dixon in Michigan).  Compare these wins to 100% of the vote (Mark Kelly in Arizona), and 100% of the vote (Gretchen Witmer in Michigan).  This is not the face Republicans want to show the American people, a party that is splintering with about half of their voters still loyal to Trump.
Perhaps the greatest indicator of the problems facing the Republicans comes from Kansas, a state where they believed everyone would jump on board the idea of amending their constitution to outlaw abortion.  A whopping 68% of the voters told the Republican party to go to Hell.  I saw one comment noting that Republicans evidently didn't spend enough time on their knees praying for victory.  The reality is that this party, for so many years, rather than try to read and understand Americans, was far too interested in saying "shut up!  We're in charge!"  This party is in serious trouble and, like the horse that runs back into the burning barn, they are going to push ahead.  To do otherwise would be to admit they were wrong.
Posted by Dave R at 9:21 AM