Sydney and the stolen election data

I'm heading into a work free week beginning today.  The store will not see my happy, smiling face again until Saturday, and then only for 6 hours.  The department has been rather understaffed lately.  I've helped by giving up some of my free time, something I'm not fond of doing.  They still have to hire a specialist to replace the one who gave his notice, and then showed up for a few hours on his last day.  Another associate, as I mentioned before, fell off a roof.  He's scheduled to be back at the desk on Thursday, with his shoulder in a big cast; that's going to put a damper on his texting.  The Haitian we hired to be an evening aisle associate has also stopped showing up for work.  He told us he followed his own schedule rather than the one written for him.  I do hope his personal schedule lets him know he's being terminated as a 'no call, no show.'

They were predicting rain for yesterday, and what we got was the occasional shower.  So, last evening I was out with the hose watering my plants.

When I got home from work yesterday, my neighbor's brother was at the house.  Since they're going to be throwing everything out, I wouldn't be surprised if he wasn't picking through things.  As I'd said, Dirty Dawg had been there on Saturday to give them a quote and evidently it was more than they were wanting to pay, otherwise that house would be empty.  It will be interesting to see how the family proceeds.

And Rudy Giuliani is going to be indicted, at least that seems to be how things are playing out.  He's before a Georgia Grand Jury today.  I wonder if he's going to be sweating hair dye. 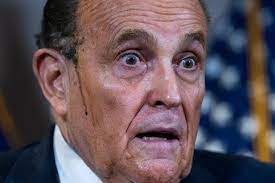 Oh, and evidently the FBI also confiscated 3 of Trumps passports, though he admitted one of them had expired.  Let that sink in.  3 passports.  He doesn't have dual citizenship with any other country.  I have one because, as a US citizen I only need one.  But he had 2 passports he could use.  Something smells a bit fishy.  The fact that they took them implies they see him as a flight risk.
And I do believe that Lindsey Belle is supposed to be testifying today as well.  He is probably not sweating hair dye, bullets?  yes, hair dye, no.  I wonder if any of those NDAs he had his escorts sign become null and void if his ass gets indicted.
You do have to admit that bombshells seem to be dropping daily now.  The Washington Post dropped this one yesterday.   Treasonous Sydney Powell and her group of traitors hired a computer group to breach sensitive voting machines in 3 states:  Georgia, Michigan, and Nevada.  That's a criminal felony.  These charges will no doubt make Sydney a flight risk.  Ouch.