Yesterday was... well, let's just say I spent over 5 hours sitting at the flooring desk.  I set up 2 customers to have their floors measured, one for carpet the other for viny, as well as a blind installation.  I was busy in the early afternoon, but as the hours wore on everything pretty much came to a boring stop.  The flooring specialist who handed in his two-week notice has decided that he's not going to work those 2 weeks and has been a no call, no show for several days.  Idiot.  He's going to get a 'non rehire' termination.  This is called burning your bridges.

The new wall clock I ordered will be arriving tomorrow.  I will need to zip over to the store later this afternoon to get some stronger mounting screws since this clock weighs more than the old clock.  I will also probably pull out my stud-finder.  While I'm there, I'll be picking up Biggie's refill prescription for Gabapentin.

Speaking of Biggie, I've cut back his dosage of Carprofen to just one tablet per day, half in the morning and half in the evening.  Like us humans moving the aging process, his stiffness is not constant, some days sitting down for him is difficult, other days he has no problem.

Something odd happened yesterday while I was on the treadmill.  I don't know if it was because I was hustling along at swift 3.5 mph, or something caused the problem, but my Garmin recorded me going up 44 sets of stairs and down 67.  Very intersting. 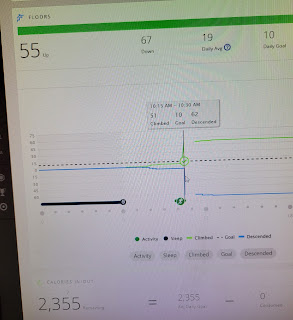 Nancy Pelosi is most likely going to land in Taiwan this evening.  This is pissing off the Xi, who desperately wants to pull a Putin and invade the island.  Surprisingly, a number of Republicans are supportive of her visit, in fact, I do believe she invited several to join her as she thumbs her nose at Xi.
Also impressive was the Biden administration taking out the leader of Al Qaeda.  Even Fox News gave him a thumbs up on that one.
And people are waiting to find out what Sinema says of the Schumer / Manchin bill.  I understand that Manchin, himself, is in communication with her.  Now, what do you think he's saying?  Possibly "now is not the time to burn your bridges, Toots?"  She is up for re-election in 2024.  Or maybe something like "you have no idea how much fun there is in kicking Mitch McConnell in his nuts."  We don't know.  I do know that if she crouches down and shit on this bill, she'll be putting herself on the Republican side of a very deep ravine.