Good morning, World!  Today is the last day of August.  Fall is heading our way and in roughly 22 days it will arrive on our doorstep.  I suspect there are quite a few people in this country who will be ready for the cooler weather.  I know I will be, just so my electric bill gets a break.  Kilowatt charges went up in June because... well, even utilities need to keep their stockholders happy.
Biggie's visit to the Vet was less expensive than I had been anticipating:  $162.  I was expecting the charges to be much higher because besides the exam he was also getting 2 inoculations:  distemper and rabies.  His weight hasn't changed, he's still 114.  Like most humans, he was a bit cringey about getting on the scale; it took 3 of us.  She suggested increasing the frequency and dosage of his gabapentin, besides the 2 he gets in the morning and evening, a 5th capsule in the middle of the day might help him with his stiffness.  They gave him doggie cookies, though, and that made everything hunky dory.
Here's a sticker of Dark Brandon that Meidis Touch is selling.  If you're interested, you can pick it up at their website. 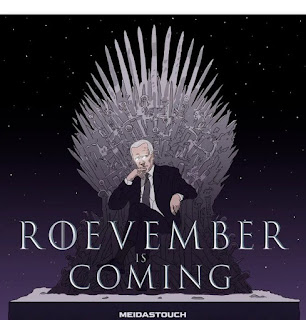 I went to see 3000 Years of Longing last evening.  I liked it.  Idris was good.  Tilda was great!  For those who don't know, it's the story of a djinn trying to convince a scholar who field of study is narratology to make her 3 wishes.  It's a character study of 2 individuals and their road to happiness told with lavish sets and special effects.  I enjoyed the spectacle but found the ending a little too anticlimactic, at least at first, until I realized that for many of us, our own lives are rather anticlimactic. 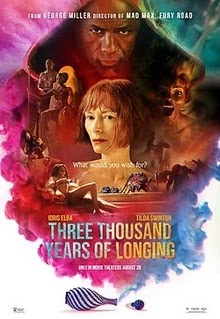 And, of course, at 1159 PM last evening, the DOJ provided their response to Judge Cannon regarding the Special Master which Trump had requested.  By now, I'm sure many of you have seen the picture they provided.  You do not need a Special Master to decide if something Top Secret.  I found some the added details they provided quite telling, such as 3 of the classified documents were found not in the storage compartment, but rather were discovered in desks.  As someone who has worked in both HR and Accounting, I can tell you that the only things usually kept in desks are reference materials, and projects you are currently working on, everything else gets filed away.  So, were these documents being used as reference materials, or were they part of a large project?  Think about it.  One thing I did see is that the DOJ has a policy of not charging a political candidate within 60 days of an election, though it was pointed out that Trump is not a candidate.  The word is that an indictment should be coming in possibly late November or early December.
Posted by Dave R at 7:28 AM