Here in Central PA, yesterday started off great, much was being accomplished and I was feeling quite satisfied until mid-afternoon.  And then?  Son of a bitch.  I was preparing to continue my walk through Pompeii, had my cute jogging sneakers on, the Senso earbuds hanging from my shoulder, however, when I went to turn on the little laptop connected to the TV the old familiar screen didn't pop up.  Nope.  I got a blue screen and an error message: 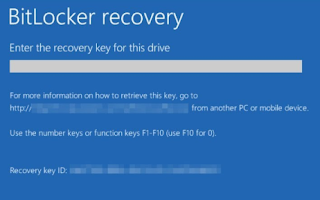 Well, damn.  The culprit?  An update that went... awry might be an acceptable word to use.  The recovery process was not arduous; however, it did entail resetting the little laptop which took too much time.  Almost an hour.  Now that doesn't sound like much, but my momentum was thrown completely off.  By the time the reset was complete, it was time to make dinner and feed the dogs, and for about an hour and a half I was cranky.
I must say, though, reading the bits and pieces of the affidavit that had not been redacted buoyed my spirits.   I found it interesting that the process to get the documents Trump stole stared in May of 2021, much earlier than I had thought.  The fact that there were handwritten notes on some of the documents is important.  In fact, so much damning information was released in the redacted version, one can't even begin to imagine what was blacked out.
Karl Rove saying the best thing Trump could do right now was to shut up and let his attorneys handle this was worth a hardy har har har.  Trump shut up?
And almost right on cue, Hunter Biden's laptop reared its ugly head in MAGA LAND. The too, too pale Mark Zuckerburg told Joe Rogan that the FBI had asked that they limit the amount of importance that little turd was getting on Facebook because they were certain it was part of a Russian disinformation program.  Of course, MAGAs only heard the part they wanted to hear, the bit of Russian plot to skew the election was totally lost on them.  Think about it.  They're more upset by was Zuckerburg said than the fact that a very treasonous Trump was probably peddling intelligence secrets the Russkies and the Saudis think he was important.
Let's be honest, this will take the Republican party a longer to recover from than my little laptops Bitlocker issue.