Mike and the Pizza boxes

My new clock arrived yesterday.  It will be hung this morning.  Tiling was also done in the kitchen.  I've a little more to do before I'm finished.  The glass tiles I used for my backsplash now cover the area behind the stove.  I will need to grout and seal them, but then one more step is completed in finishing of my kitchen.

My neighbor, Mike, died.  Don't ask me when, or why because I don't know.  Tuesday was garbage day, so last Monday his wife took out their garbage cans.  When I got up last Tuesday, their car was gone.  When they hadn't returned by Wednesday, I figured they'd gone down to see one of their kids in Maryland.  Yesterday, I got a card from her in the mail which began with "I suppose you've heard about Mike."  Well, I didn't.  Her husband was not a like able person.  For most of the 29 years I've lived here, I've had to deal with his anger management, and alcohol, and drug abuse issues.  The problems?  Too numerous to list here.  Well, maybe just one.  Twelve years ago, 3 young men rented the end townhouse across the street; they were friendly and funny, and made me laugh.  On weekends, they would have small parties with maybe 3 or 4 friends who parked on the street, sometimes either in front or behind Mike's car.  Mike didn't like this, so he used pizza boxes to try and block off our side of the street.  That's right, he put a pizza box in front of his car and one behind.  Of course, it didn't work for obvious reasons.  This incensed Mike, so he drank all night, and the next morning went over and pounded on their door.  When they answered, he pulled a knife and threatened to kill them if they parked on our side of the street again.  They promptly had him arrested.  Believe me when I tell you this was just one of the things, we in the neighborhood dealt with on a fairly regular basis.  You shouldn't speak ill of the dead, but ever since I got his wife's card all I've been able to do is laugh and think of how big an asshole Mike was.

Here's a bit of a pallet cleanser, my elephant ear plant. 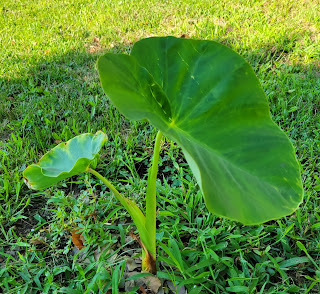 And the fallout from Tuesday's election in Kansas is still dropping like dung on the GOP.  I don't know about you, but I'm enjoying it.
Every senator voted to admit Finland and Denmark to NATO, except for 1, Josh Hawley.  He must think that's the masculine thing to do.
Finally, just a bit about Alex Jones.  His scumbag attorneys accidently gave the prosecution his phone records and text messages over the past few years.  I watched some of the videos.  We can only pray that the worst will happen to him.  I do know a whole lot of people want to get their hands on that information, including the IRS, the January 6 committee, and the DOJ.  I hope they take his passport, because I do believe Jones has suddenly become a flight risk.