Trump is now a Flight Risk

The temps outside were a crips 57 (F) when I woke up this morning.  Nice.  The central air is off.  Windows are open.  This is nice.  This afternoon's high is predicted to be around 83 (F).  Tomorrow, we're in for a treat.  Temps are supposed to be in the mid 70s (F).  Of course, I understand this is but a brief respite.  We're not even halfway through summer.  Temperatures will climb.

Last evening, I tried going into the old Rosetta Stone French course I purchased a long time (11 years) ago and got an error.  Server could not be reached, try later.  The German works, but not the French.  So, I sent them an email.  They responded in German.  Interesting.  The French was just for review, if you don't use it, you lose it, though I may well continue working on my German.

A character is disappearing from The Body Under Ice.  Cal Glenn, who originally had a much larger part to play not gets a mention.  This happens.  The side-plot he was involved in is no longer necessary, in fact, it has become a drag.  Cal is still going to get a mention.  But rather then have Eli and Max talk to him, they will now read the St. Ignace police report.

Oh, and wasn't yesterday a jolly good day?  John Fetterman had his first campaign rally since having his stroke and it was packed. 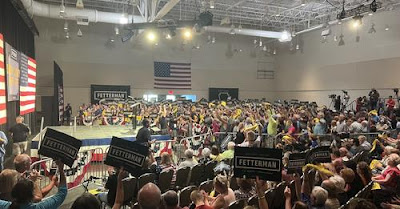 And, of course, the search warrant was released to the public yesterday.  Not a ho-hum moment at all, was it?  America now knows Trump is at the center of a criminal investigation.  The one charge which seems to be garnering the most interest is US Code 793 which has to do with the gathering and transmitting of Defense information.  An important fact to note is that this charge has nothing to do with whether the material was classified or not, it's solely focused Defense information.  Providing such information to... oh let's say the Saudis, is treasonous.  Espionage.  Every page of those documents is now being fingerprinted, and it's not like the old days when you actually had to dust the page.  Nope.  Now they use equipment similar to a scanner, and they have more than one.  In fact, they may almost be finished.  Oh, and don't forget the FBI now has in their possession the security video for who knows how many years.  This may have been going on for quite some time.
This is very bad for 'the Donald.'  Fox is shrieking the evidence was planted, however Trump, and his attorneys, have been pushing the fact that he declassified everything.  You can declassify planted evidence.  Duh.  Tristan Snell, he used to be an Assistant Attorney General for New York and help prosecute Trump for his Trump University shit show, was the first to echo what I've been saying for some time.  Trump has now become a flight risk.  You see, the penalty for breaking US Code 793 is calculated by the page.  The more pages people, like maybe the Saudis, touched, the longer the jail sentence.  Most definitely, Trump is now a flight risk.
Posted by Dave R at 9:11 AM