Books of my Youth

Holy Crap!  It's December!  Doesn't time fly?  In just 3 weeks we will hit the shortest day of the year... and it's about damn time.  I can't wait for our days of more sunlight and less nightfall.
And I did managed to get an extra half hour of sleep this morning.  Of course, since I've been up I've already managed to pop a load of laundry into the washer.
And I did not arise to find ice and snow glittering the landscape.  Nope.  Now they are forecasting a mixed bag of precipitation for later this morning which might give us a very light glazing.  Just to be on the safe side, I bought a 50 lb bag of rock salt before I left work.  I need to do more work with my upper body muscles because that sucker was heavy as hell.
I paid another visit up to my attic yesterday.  I have about 5 boxes of books up there I have to decide what to do with.  Well, 4 now, one was thrown out.  Squirrel pee.  The pages of most of the books in that box were stuck together.  Yes, I do get squirrels in my attic, I'd rather them than bats in my belfry.  Anyway, one of the boxes that hadn't been peed on held some of the books of my youth.  I took a pic of some of them: 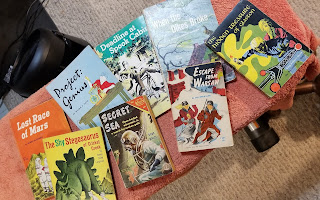 I have no idea what to do with them.  They're all around 55 - 57 years old.  What do you do with the relics of your childhood?
Politically, this holiday season has been rather quiet.  Very few Tweets from the Idiot Jerk in the White House.  I understand he needed to be bound and gagged to keep him from spilling the beans about his trip to Afghanistan.  The Democrats are supposed to be working on the Articles of Impeachment starting tomorrow.  They need to get this thing done.  Wrap up the accusations and send them to the Senate which will vote them down.  We all know this is going to happen.  The smart thing to do is use the Senate's vote against them in the upcoming elections.  While they will trumpet their vote and denounce the Articles, a majority of the country has already passed judgment on them.  At this point they are really only trying to keep their base from being shredded away from them.  Prepare yourself for the lies, because that party is going to lie like the sack of shit in the White House.
Posted by Dave R at 7:22 AM