Tis the morning, before the afternoon of Christmas Eve.  Is anybody working out there?  Of course, that question is loaded.  My friend Patty said she's going to hit the supermarket this morning... good luck with that.  I zipped down to my local giant yesterday for a few items.  Even at 0900 the store was very busy.  Lots of elderly people were buying necessities since everything closes down tomorrow.  I had no problem parking far from Giant.  And though the aisles were crowded, self-checkout was a breeze.  Most elderly people hate self-checkout.  They want a cashier.  And so, they stand and wait in line of other elderly people.
I went to see the next iteration of "Jumanji" last evening.  Since no one really remembers the minor characters... the kids who were sucked into the game in the first film, they need to be introduced.  That was a tedious twelve minutes.  The only bright spots were the introduction of Danny DeVito and Danny Glover.  Though the film is funny (and it is really funny), much of the humor revolves around their gaming avatars.   Even Kevin Hart was funny, and for me that's saying a lot. 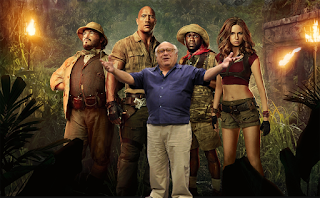 And, since this is the day before Christmas, news is going to be light today.  The Idiot Jerk in the White House is in his Dachau in Mar (something or other).
Oh, and Christianity Today had another op-ed about phony Christians selling their souls to the Idiot Jerk in the White House.  Most of them are going to ignore it.  To do otherwise entails looking at the growing evil within their hearts.  They will never do that... accept the fact that they are unclean.
Posted by Dave R at 6:29 AM