For those counting, today is my hump day.  Yippee.
I did get a measure yesterday.  That's what we're supposed to do. Get measures for flooring installations.  For a moment I was a bright spot.  The dark spot was that the large, home improvement retailer lowered not only 4th quarter expectations, but also their forecast for next year.  Why the drop in sales?  They're claiming it is most likely due to theft caused by the opioid crisis.  That's right, addicts are coming in and stealing hundreds of millions of dollars worth of products...  Now, that's what I call slinging horseshit.  Addicts aren't that smart.  Nope.  Theft is a business.  It's called Organized Crime.  And it ain't going away any time soon.
On the lighter side, I bought some new clips for my cycling shoes... to be more exact, the left shoe. 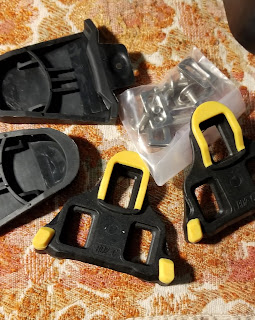 This pair included little, rubber covers so they don't click - clack like tap shoes when I'm walking around on my hardwood floors.  They also keep me from scratching the floor as well.  Believe me, I've never had any desire to be a tap dancer.
Unlike Boris from the UK, who has no problem shuffling from one routine to another.  He's a younger version of our Idiot Jerk.  And dance?  That man should be on Dancing with the Duds, or what ever the British dance show is called where phonies line up to trot out their lines.  Lie Dancing?  They're experts.  And no, that's not a typo.  I didn't mean to say Line Dancing.  You know he is a agreeing to some crazy deals with our Idiot Jerk that will end up with the citizens of the UK paying through the nose.  But that's okay.  He will pirouette in to a pas de deux with our Idiot Jerk, all the while smiling back over his shoulder to avoid seeing the higher costs his Conservative government will establish.  And those addled fools who vote for him will see their NHS being whittled down to the bone.
Anyway, my route last night was in Canyonville.  A little over 16 miles long.  Not very memorable, so I'm deleting it from my downloaded routes.  No ride tonight.  It's every other night from now on.  That works better for me.  Longer, with a 24 hour recovery period in between.
Posted by Dave R at 6:28 AM