Well, I get to go back to work today... for another 5 days.  Ho-hum.
I did a 17+ mile ride in Greece yesterday, rather than the 6 mile climb challenge I need to complete. 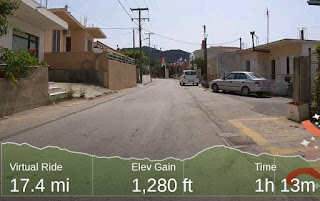 This was the first route I've ridden in which the wildlife I saw was something other than birds or dogs (there are lots of dogs being walked).  About halfway through the ride a deer ran across the road in front of me.  I will admit there was a moment of surrealism.  Surprisingly, I missed the snake 4 miles farther down the road.  This was a fun ride.
I saw where the Watchdog group came out yesterday and said the FBI had not been spying on the Idiot Jerk's campaign... and Billy Barr was having none of it.  That was to be expected.  I'm sure the Idiot Jerk tossed him a fish since Billy's proving he's better then the trained seal he desperately wants to be.
One of the biggest belly laughs I got was from reading an article in Bloomberg Business Week, where author said that even while the Idiot Jerk is facing impeachment, this is the best of times for him... and he cited the November jobs report as proof.  He claimed the Idiot Jerk was solidifying his re-election because of... the November jobs report.  This nitwit has to be a superficial conservative.  Evidently the fact that the GM strike was over and thousands of people went back to work eluded him.  As did the fact that at this time of year there are massive amounts of seasonal hiring.  You know?  Christmas is coming?  UPS is hiring like it's going out of style... for temp jobs.  The same with the United States Postal Service.  And Amazon.  An associate of mine interview with UPS and was told flat out that in 3 weeks the job was going to disappear.  Anyone making a prediction from the November jobs report lacks total credibility... unless of course he's an Idiot Jerk henchie.
Last evening when I went up to bed I found Biggie already there.  Lilly was there, as well, but she didn't give me the look Biggie gave me, that 'you don't really expect me to move' look.  For some reason or other, he doesn't seem to understand that bed is mine... I'm just kindly letting them sleep on it. 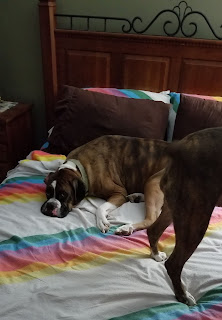