Well, it's Monday and I don't go back to work today, unlike some of you.  That will happen tomorrow.  My schedule is not bad for the next couple of weeks.  What will be interesting will the the one for the week of the new year.  That's a 32 hour work week with 8 hours holiday pay.  I could work for 5 days in a row, or for as many as 9.  I have a scheduled 4 days off starting on 1/4, so we shall have to wait and see.
I have mounted my clock.  I know some will find that sentence amusing.  Here it is. 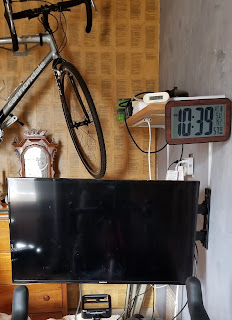 Not only will I now know what the time is, I'll also know the temperature.  Heat rises.  I always knew my upstairs was warmer than the first floor (ground floor for everyone living outside the United States).  The variance is 4 degrees.  It will be interesting to see how warm the room gets when I start pedaling.
I downloaded another route in Greece, however I won't be riding it today.  This afternoon I'm going to try and climb a 6 mile hill in Italy that's part of my challenge.  If I can get to the top of that I will move up to the next level in Rouvy Cycling.
Oh, and I saw the Russians were banned from the next Olympics.  Doping.  Now, I don't know if the directive is coming from the top, but I wouldn't be surprised.  We have our Idiot Jerk, the Russians have their Putsy Putin.  Both are trying to be Emperors.   I understand Putsy Putin is losing his popularity.  Our Idiot Jerk was never really popular... except among of small-minded individuals.
There was an interesting article in Reuters in regard to jobs and America.  Jobs are going to coastal cities, not cities in the heart of the country.   There doesn't seem to be much potential in cities like Indianapolis, and St. Louis, and Kansas City for future job growth, which runs completely contrary to  the Idiot Jerk's "Make America First" campaign.  The voters in those cities who turned out for the Idiot Jerk might just as well have sat home on their toilets and flushed their votes away.  The only way jobs will return to those areas is if we give corporations big tax breaks and incentives, and that doesn't guarantee those jobs they bring will be high paying.  We should never started giving them tax breaks in the first place.  Of course, isn't that what the GOP has always planned, for the American people to bear the burden of taxes while corporations go Scot-Free?  They call it Trickle Down Economics.
Posted by Dave R at 6:38 AM