Thursday - and it's cold outside... 18 (F) and holding.  If the forecast is correct, we're not supposed to get above freezing.  I'm comfy here in my warm house, thanks to my two thermal heating units who cozy up to me whenever I lie down.
Has anybody else had trouble accessing Bob's blog?  It never loads for me and I get the message "page unresponsive."
I have been tracking the progress of my TV and was pleased to see it had arrived in Harrisburg at 0337.  Why the arrival date was changed to 12/20 is beyond me.  Perhaps a little Grinch was at the keyboard out in Phoenix, from whence it shipped.
Of course, the House of Representatives voted on the Articles of Impeachment.  As expected, voting went down party lines.  I saw where Tulsi Gabbard voted present, rather than take a stand.  She's the Democratic candidate who claims she's not being groomed by the Russkies to run as an Independent.  There's something wrong about her.
I also saw where Moscow Mitch and his chorus of goosestepping henchies pushed through another 13 ideologically corrupt conservative judges.  Whether you know it or not.  That is an act of desperation.  He knows his party is going to be removed and is trying to spawn as much crazy corruption before that day happens.  There are legal ways to remove those judges.
An interesting side note:  I can remember being told by Evangelical Christians that they had no problem with the Idiot Jerk being removed and replaced by Mike Pence.  Now, however, they're singing a different tune.  For a supposedly religious group, this shows how easily they have been corrupted by the power the Idiot Jerk bestows upon them.  In fact, yesterday some moron compared the vote on impeachment to the trial of Jesus.  Can we talk about false gods?  How about false prophets?
And finally, to add a bit of levity, I thought I'd share a pic of one of the toys the dogs are getting for Christmas this year.  It's a T-Rex! 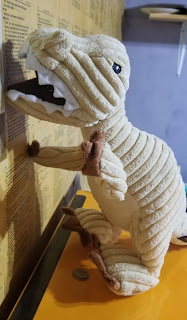 And let me tell you, they knew he was out of the box for a photo shoot.  In 2 seconds flat they had that little guy surrounded.  Luckily for him, I'm taller then they, so quickly back into the box he went, safe and sound until Christmas morning.