Well, it's Christmas... kind of.  Today's supposed to be retail's busiest day.  Today is also my last day of work before my mini-vac.  I'm excited.  I know not too many will visit the Flooring Desk.  The departments which are going to be shopped hard will be Hardware and Garden - most of our Christmas stuff has already been put on Clearance.  Ha!  No buys for me.
Today is also Winter Solstice... the shortest day of the year! 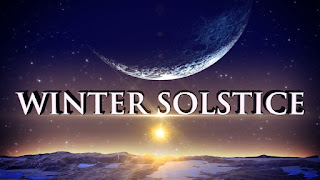 Starting tomorrow, everyday will be longer... until the middle of June, at which time we will hit peak sunshine up here in the Northern Hemisphere.  Now, that should put a Sunny smile on your face.  and I'm not talking about Sunny Rigalito either.  You don't know Sunny yet, but she's the Sheriff of Rattler's Den.  She's originally from Boston.  According to her, she cold-cocked her husband to get out of an abusive marriage.  Bobby Tussel thinks she used a caste iron frying pan rather than her fist.
And, of course Epoch Times has been shut down.  For those of you who don't look at Facebook, Epoch Times put out a lot of Pro-president articles which were blatant propaganda.  The website had a lot of friends.... MAGA Heads, you know?  And it spoon-fed them this pablum of deceit in order to curl their toes in delight.  And Facebook shut it down.  Because?  It was run by Vietnamese in order to interfere in our elections.  They sought to sow discord.  And it was all half-truths and lies, mostly lies... the stuff Conservatives live on.
And finally, the Idiot Jerk in the White House signed a funding bill yesterday to keep the government running.  Interesting, isn't it?  He needs to be impeached before he decides to sign a bi-partisan bill with out an ugly Tweet.  One of the things I find amusing in the bill is that it includes the funding of a Space Force.  I had to laugh at that.  Wouldn't it be funny if the only things this moron is remembered for are:  1, that he was impeached; and 2, he funded the branch of the military that took us out into space.
Posted by Dave R at 6:18 AM