The life at the End of the World

Crap, I get to go back to work today.  Now, ain't that just damn ducky?  And snow is on the way, not much, they're calling for 1 - inches, at least the last time I checked Accuweather.  I had been hoping the white stuff was going to start falling over night, then I might have an excuse for calling off today... a weak excuse, I'll admit, but still something on the periphery of acceptability.  No such luck.
I got a nice ride in yesterday afternoon:  Ratzenreid - Wegscheidel.  It took me a little over an hour to ride 19.2 miles.  My legs felt fine afterwards.  Burned off almost 800 calories.  To celebrate I made egg rolls.  Delicious.  That is the compensation, you know?  Being able to eat with out the worry of putting on that extra pound.  And building muscle, too.
'The Bend in the River' chapter is finished, at least the rough draft.  I've moved on to 'Conversation in a Pickup Truck.'  This is where our heroes have a  Q & A with Cedric Greely.  Nice name, eh?
And I understand neither the Idiot Jerk in the White House nor one of his council will be sitting in during this weeks Impeachment process.  They say to do so would insinuate guilt, and they claim they did nothing wrong.  Of course, just about every criminal convicted has always said the same thing.
And for those who didn't know, Jade Evans is back on Youtube.  Jade who?  She's one of Lori Loughlin's media slut daughters.  This is making news only because her lying scab of a mother is involved with that college entrance scandal.  I didn't read either the NYT or the LA Times articles because... these are bad Americans, the trashy kind who love basting themselves in their own, phony superiority.
About the title... I had this weird dream last night.  It was actually me reading the legalese crap Google (or any app, for that matter) has you read every year concerning your security; the documentation where you acknowledge your rights to privacy and how much of your information they can share.  And it wasn't so much as my reading, but rather hearing a voice read it aloud.  Everything was going fine until the voice said "and I give all password access to the life at the end of the world," at which point I stopped it.   The life at the end of the world?  Who the hell was that?  Since I didn't know, I revoked the access... and woke up.  Interesting, eh?  So much so, I Googled 'the life at the end of the world,' after making coffee, of course.   This is what I found:  something by Wendie Renard.  You can read it in French, if you want. 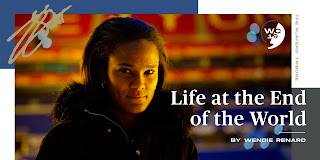