Okay, so is everybody resting today?  I mean it is Sunday after all.  I can remember Blue Laws here in Pennsylvania.   Blue Laws you ask... well, there was a time when religion in this dictated Sunday was supposed to be a day of rest.  Stores were closed.  Even grocery stores.  Business's were closed so employees could go to church.  There were no such things as Convenience stores, no 7-11's, or Stop & Go's, or whatever you call them.  If you ran out of milk, you did without.  Movie theaters were open, but if you were like my Mom you never went.  She considered going to the movies on Sunday a sin.  There was nothing wrong with sitting on your sofa watching cable TV, but plunking down your hard earned 35 cents to see a movie was sinful.  (That's right, when I was much younger, kids paid 35 cents to go to the movies).  There are some who dream of bringing those days back as a way of controlling the population.  They want to dictate what is good and what is bad.  Remember, give them an inch and they'll take a mile out of your life.
And, of course, it was only a matter of time before one of the dog's Christmas toys succumbed.  Every year I try and pick which one will fail to survive the first week.  This year, I thought the T-Rex was going to bite the bullet early, of course I also thought it was going to be their favorite.  I was wrong on both counts.  This year that infamy goes to... the inch worm. 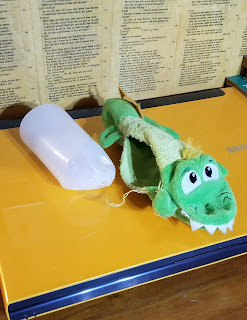 Now, I'll admit he doesn't quite look like and inch worm, rather his appearance is much more akin to dino cycling socks.

Needless to say, the dogs have pulled the worm's plastic innards out, the parts that have the squeaky, noisemaker.  That plastic thing is already in the trash.  The worm's outer skin will be there soon, other wise Biggie will eat it.  I'll throw it out before it gets swallowed.  This is exactly what we need to do with those groups who want to limit what we can do on Sundays.  Just look them in the eye and say:

That's right, just tell them to eat it... and then wait for them to regurgitate.