Ah, it's Friday, November 8.  For those of you who don't know, today's my birthday.  About 45 minutes ago I turned 67.  I find that number amazing.  Not because I've achieve it, rather, I have to admit I never really put much thought into getting old.  Now that it's happening it's kind of like... well... fuck.  I'd say "what do I do for an encore," but have chosen to save that line for when I turn 90.  A word of advice, if you have to get older, and most of us end up doing just that, it is a lot better to do so gracefully... and opinionated as hell.  I find a lot of joy in telling people what I think.
I rode 12.56 miles yesterday.  I was very pleased.  You see, the last time I rode that route it took a bit over 54 minutes.  Yesterday I did in just a tad over 48 minutes.  That's right, I knocked 6 minutes off my time.  The record is a bit over 24 minutes.  I will never hit that, but I would like to get my time down into the mid 30's.  We'll have to wait and see if I can knock another 11 or 12 minutes off my time.
And rather than buy a store bought cake from Giant like I usually do to celebrate a birthday, I baked one.  Most of us buy our cakes, and our cookies, and our pies; baking just takes too long.  Our palate has deteriorated to such a degree that when we taste store bought cake we say..."hhhmm, the icing is good."  While I did spread a light, peanut butter frosting on my cake, the real flavor buster was the cake itself.  Holy Crap!  I could not believe the flavor of that cake, all moist and deliciously golden.  Even the dogs liked it!
And yesterday, while I was letting the dogs out into the drizzle to do their business, I saw I had another rose.  On November, 7 my roses were still blooming!  I took a picture. 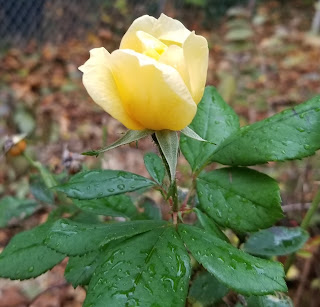 Now, wasn't that a pretty gift?
I saw where Michael Bloomberg is testing the waters for possible presidential run... without going debating one single person.  A word of advice to Michael: don't even think of sticking your toes into the water.  A run by you could well destroy the unity the Democrats have been building.  You're a businessman who thinks he can run the country the way he runs his business.  You're wrong.  We don't need another damn billionaire in the White House.
Posted by Dave R at 6:32 AM