Well, it's Sunday... and I get to go back to work.  For 3 days, and then my weekend begins.  My schedule for Thanksgiving week is crappy.  Off on Thanksgiving, working Black Friday and Saturday and then off on Sunday.  Nobody buys flooring on Black Friday.  That doesn't mean we're not going to get bubble-brained morons asking what are 'special' is...  I always point to appliances saying "go buy a $2500 refrigerator, that's where our deals are."  If you're interested in buy a washer, or dryer, now is the best time of the year - all of our others sales are mere shadows of what the discounts are now.
Yesterday morning I walked onto my front porch and saw all the leaves had fallen off my gingko.  Have you any idea how that feels?  Knowing your gingko is naked?  I took pictures hoping to drum up a little sympathy since... well... now it looks so... woody. 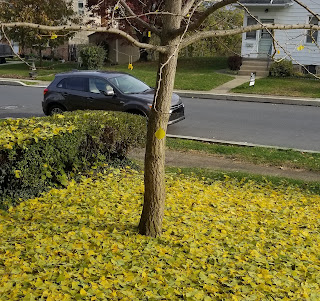 I saw where a Class Action suit has been filed against Madonna.  People are fed up with paying good money for a show and having her show up 2 hours late.  Her comment was "the queen is never late."  Someone needs to sit her 61 year old ass down and remind her she's doing 'smaller venue' shows because ticket sales from her last arena tour were... lackluster... yeah, lackluster is a good word for her ticket sales.  Her die-hard fans will always show up, but they're getting older and their patience is beginning to wear thin.
I saw where the Idiot Jerk in the White House went to a college football game in the deeply red south and was... cheered.  At this point in his failing Republican political career this is to be expected.  I know this is going way back, but the same thing happened after Nixon's failed re-election extravaganza.  The Republican Party became highly regionalized.  Only in the deep south, scarlet red and highly Christianized south did they stand of chance of winning elections.  This is happening again.  However, this time they have a problem.  The deep south is diversifying far more quickly than their Conservative white minds can comprehend.  They're going to realize there might not be enough crackers down there to make a decent bowl of soup.
And finally.  A lot of us have experienced the single brain celled antics of troll.  Mildred was right when she pointed out how hysterically this person is in his desperate attempt to be disruptive.  Right now I'm simply deleting the comments.  That's what this person deserves... to be deleted.  If it continues I start moderating the comments.  Eliminating them before they see the light of day is no skin off my back.