No President is King

Okay, I was wrong.  Management did choose to drape thick, black plastic over our Black Friday Specials.  Some people find this quaint.  Yesterday an older woman asked me about the black, low density polyethylene so I told her "Black Friday."  She smiled because she thought it was cute.  Go figure.
Yesterday was slow.  Not excruciatingly, but those days are coming.  The same thing happens every year.  Sales have always been cyclical.  Of course, corporate doesn't let that get in the way of setting budgets.  The Sales Plan does go down, but never as much as the plan from the previous year.  In retail there is always an increase.  We have to keep those stockholders happy.
A judge has ruled that the Idiot Jerk in the White House can not keep witnesses from testifying.  The line that stood out most to me was "the president is not a king."  The sad truth is that the one MAGA elected wants to be more than a king.  He wants to be a dictator.  You can bet this decision is going to the Supreme Court.  This is why he tried to put in as many Conservative judges as possible, to protect his sorry ass.
And once again Rudy Gazooty said he's not worried.  He has insurance.  I'm wondering if that might be a copy of the Golden Shower Tape.  If not that, then some other juicy tidbit detailing how the Idiot Jerk compromised himself with the Russians.  He evidently doesn't seem to be too worried, so maybe behind the scenes he's talking to the Democrats about becoming a State's Witness.  That threat would no doubt sent shivers down the the Idiot Jerk's corpulent torso, shaking all of that jelly from Hell.
My Marlowe has arrived. 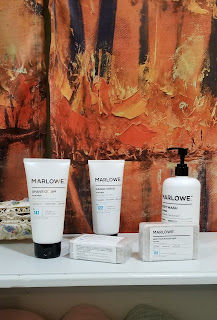 I set myself up for a subscription.  If I don't like it, I'll just cancel.  This is how life is.
Finally, customers began buying live Christmas Trees yesterday.  They want them up for Thanksgiving.  Impress the relatives, you know?  Look!  Live tree!  In 3 weeks they'll be hearing dead pine needles falling to the floor.  You only need one to start a cascade.  And in 4 weeks their floor will be covered with them.  Live trees belong in the forest.
Posted by Dave R at 6:35 AM