Another Friday night and another concert.  Not Elton John.  My brother in law called about a week and a half ago.  He had bought tickets for he and my sister to see Grace Potter.  My sister decided she didn't want to go, so I was offered her ticket.  I said yes, of course, not because I knew who she was but... well, she was at the Forum which is a very nice venue in downtown Harrisburg.  She was very dynamic.  I had listened to a few of her songs to familiarize myself with her music.  She used to sing with a group called The Nocturnals, now she's solo.  I'd recommend giving her a listen if you get the chance. 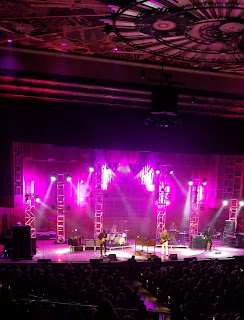 Anyway, now I'm running a little behind.
I've started approving and disapproving comments while at work.  I use my phone.  It makes it nice and simple.  They don't really want me using the store computer for personal use.  I should be using it to sell product.
And of course, during testimony yesterday the Idiot Jerk opened up with a volley of hate Tweets.  Evidently the GOP had been going to treat Marie Yovanavitch with at least of some the respect she deserves... and then the Idiot Jerk started throwing Twitter acid on her, at least that's how one media outlet phrased his attack.  He is such a dumb shit.  I wouldn't be surprised if there weren't a number of Evangelical leaders laying their hands on him as he launched yesterday's attack.  The think he was sent to give them what their craven hearts so desperately want.  And while his base might have started spinning in giddy little circles of delight, a majority of Americans said "what the fuck?"
Oh, and Roger Stone was found guilty on all 7 charges.  Prepare yourselves for not only a pardon, but a tiny fingered Tweet about how the Idiot Jerk can do whatever he wants because he was sent by... Pure Evil.  They have no idea how fast their time is ticking away.
Here's a vid from a Grace Potter concert in 2015.  The song is Timekeeper.  Her performance last night included a lot more percussion.  Oh, and better lighting.