They kick dead horses, don't they?

For those who didn't know... Winter arrives in one month.  The time has come for me to buy my ice-melt.  Last year I bought an expensive pet friendly product which melted little, if any ice.  Sadly, it can be pet friendly as hell, if it doesn't work?  well, it doesn't work.  Because I shovel as soon as the little flakes are done falling, I have little use for these products, and when I use them they're only for the front sidewalk.  Don't want to get sued by some dumb shit falling and breaking a hip.
I had to update the software in my car yesterday.  To do that, I needed to turn my phone into a Hot Spot.  Interesting.  I turned off the Hot Spot as soon as I was finished.
I went to my Uncle's viewing yesterday.  Wisely, the casket was closed.  He was 88.  My Aunt complained about how expensive it was, but then she spent a lot of money for a casket.  Cremation is about half the price, even cheaper if you provide your own urn.  Just about every man there was in a suit, except for me.  I don't understand why some need to formalize death.  I stayed for 15 minutes and left.
I saw this pic this morning of mountain bikers coming down a trail in Leadville 100 race.  The race is named for the town, which is named for Johnny 'Leadville' Brown, who just happened to have been married to this little girl named Molly.  You do know who I'm talking about, don't you?  The Unsinkable Molly Brown?  The one who survived the sinking of the Titanic?  Anyway, this is what it looks like when you're racing down a mountain trail in the Colorado Rockies.  Just thought some of you might like to know. 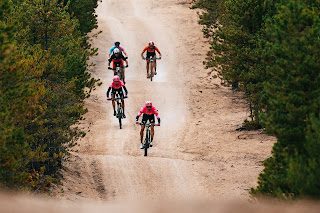 Could this be somewhat relevant to "The Body in the Well?"
Oh, and in case none of you have noticed, the GOP has found another dead horse to kick.  I'm talking about Joe and Hunter Biden.  They have always had this problem with dead horses, when they find one they just need to keep on kicking it.  They did it with Clinton and Lewinsky, and Clinton and Whitewater, and, most recently, Benghazi.  How many different hearings did they have on Benghazi?  Three?  Had they not lost the House during the mid-term elections, this is exactly where their focus would have been.  This is how they try and win elections, paint their opponents as being corrupt.  They so desperately want impeachment hearings in the Senate so they can call the witness they want.  Why, I saw yesterday that Miss Lindsey Graham has even applied to the Justice Department to begin an investigation on Joe and Hunter.  Why?  It's the only dead horse in sight and they're desperately trying to turn attention away from the hearings.  Yesterday Fiona Smith bitch slapped them into reality.  Ouch.
Posted by Dave R at 6:43 AM

Email ThisBlogThis!Share to TwitterShare to FacebookShare to Pinterest
Labels: Colorado, Fiona Smith, ice melt, Leadville, The Body in the Well