Beginning of a Trend

Well it's Kid Workshop Saturday and I'm off.
Outside the temps are a chilly 34 (F).  That storm we had on the 31st dropped 3 inches of rain in about an hour.  Many, many roads were closed for a while because of flooding.  As a result, in Enola at least, Trick or Treat for the kiddies was held last night.  Things have changed.  When I was a kid, if you were younger than 6 you stayed home, you weren't old enough to go Trick or Treating.  In today's world, if you're 6 years old you're approaching the senior side of Trick or Treat time scale.  Parents love taking their 4 and 5 year-olds door to door.  I treat them by letting out my BIG dogs who have BIG barks.  Here's one of my BIG dogs with her yellow duck and purple squirrel.  Lilly is half the size of Biggie. 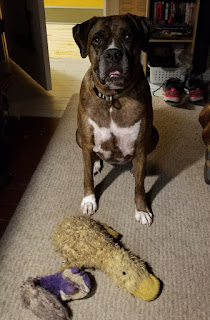 I saw last evening where Beto has finally decided to drop out of the race.  Like so many of the 'contenders,' he should never have thrown his hat into the ring.  People may love him, his ideas, his philosophy, the fact that he's Latino but... he needs more experience in dealing with those on the dark side.  Exemplary ideals are simply not enough when it comes to facing off with the hate on the right.
So, the Idiot Jerk in the White House had a rally in Tupelo.  He barked at a large crowd.  This is deep in the heart of his Base Country:  Crazy Christians, Crazy Confederates, and the KKK.  Why hold a rally in this deeply red state?  It's a sure thing, right?  Sorry, but there's a smudge of blue threatening to turn the state purple.  Republicans know this.  I see the beginning of a trend.  As the impeachment process slowly continues, so does the slow erosion of his base.  The Idiot Jerk is desperately trying to keep his loyalists from being disheartened.  Any second now he's going to start sounding like that Idiot Reagan shouting "stay the course! stay the course!"  Prepare yourselves for any lie.  Both he and the Republicans hate the Constitution.  That document keeps him from being the shitty, little Tinfoil dictator he wants to be... and he knows his Blow Bro Vlad will reject him if he doesn't achieve that status.
There's an election in some parts of the country this Tuesday.  Vote Blue.  And remember, in some states, like PA candidates can cross register into both parties so don't just vote straight ticket.  To kick their asses out of our government vote for Democrats or Independents.