And so my weekend begins!
As have so many of you, I have enabled comment moderation in order to eliminate the public platform our disruptive, little spammer so desperately requires.  Will he even notice?  Nah, he's a shallow copy and paste loner who requires a reactionary response.
The dogs Christmas toys have been ordered.  They're each getting three different toys.  They don't really care what the toy is as long as it squeaks.  The squeakier the better.
I also ordered myself a deep fryer. 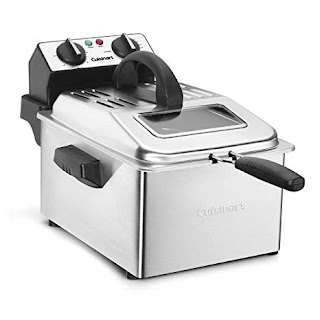 Now, I know some of you are scratching your heads and thinking "but he eats healthy, and deep fried food is really nothing more than a heart attack hiding in peanut oil."  Well, you can eat fried food as long as it's fried the right way.  When I was much younger, my Mom used to dump 3 large cans of Crisco into our deep fryer.  When she was done cooking, she'd let it solidify.  She used the same Crisco over and over again.  After a while, she cleaned out the deep fryer and dumped in more Crisco.  That's the wrong way to cook and eat fried food.  Of course, people didn't know any better back then.
And, of course, public testimony for the impeachment of the Idiot Jerk in the White House begins today.  Prepare yourselves for Twitter Hell.  I understand the GOP had some sort of SECRET CLOSED DOOR SESSION on Monday with Jimmy Jordan taking on the role of Adam Schiff in an attempt to prepare themselves.  They are doomed to failure.  Why, you ask?  Because for years they have been attack dogs.  Rabid Dobermans are more civilized.  They are going to go for the throat right out of the starting gate.  Instead of trying to get to the truth, they are going to blame.  And from his hate room in the White House the Idiot Jerk is going to be Tweeting out snarky, little names for those people testifying.  His base lives for those little names.  And all the while those Centrist Republicans in the suburbs will find deepening frowns spreading across their faces.  This ugly hatred is not what they voted for, and if the GOP thought this past election cycle was bad (and they got their asses whipped) 2020 is going to be the year their tinfoil aspirations get fried.
Posted by Dave R at 7:44 AM