This morning Lily licked my nose twice to wake me up - that's her way of telling me she needed to go potty-outside.  A few minutes later I found her sitting patiently in the dining room.  As I opened the back door, I heard the galoot that's Big Seig get out of bed (there's always a thud when his front paws hit the floor) and begin his early morning ramble downstairs.  This is what mornings are like in my household.
Today is day 4 of my 6 day work stretch.  Can you feel the excitement in my words?  I will have to wait another 2 weeks before I once again get 2 consecutive days off.
My brother sent me a text asking me to his house for Thanksgiving.  I respectfully declined.  He lives 50 minutes away, I'm going to my sisters who lives 15 minutes away.  His dinner begins at 4 PM, my sister doesn't have a big, family get together, there will be like 7 of us there and hers starts as 12 noon.  Oh, and Thursday is my only day off.
I did download one of those Swiss rides, but rode one from Deutschland last evening, just 8.5 miles out of 26 mile ride: long with lots of little hills.  I will ride the whole thing one of these days.  Not tonight though.  I usually take 2 nights a week off - no cycling.  Rest days can be very essential.
Oh, and Michael Bloomberg is running for president, in case you didn't know. 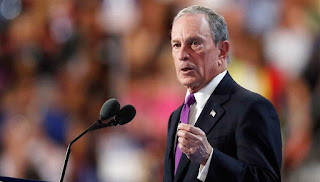 Another rich, old white guy who also happens to be a Democrat.  As I've said before, there is so much anger built up over the Idiot Jerk in the White House, even Donald Duck could beat him in an election.  That being said, Mike is no duck.  Unlike the morally degenerate squatter in the Oval Office, he actually has political experience: Mayor of New York City for 3 terms.  He is a life long Democrat who switch parties to win the Mayoral race... and then became an Independent.  While popular with Democrats in the city, he is far more popular with Independent voters.  For those who don't know, Independents are the largest voting block in the country.  For them, he will be a magnet.  Will he release his tax returns?  Possibly.  Long ago he realized the total worthlessness of the Idiot Jerk in the White House, so he's going to probably release tax information as a form of attack.  This man is the 9th richest man in the United States.  If you haven't seen his ads, you will shortly.  He's better than Donald Duck, how much better?  I don't know.  But I can tell you, if the Idiot Jerk was scared before of losing the election and going to jail, that fear is turning into terror.  There's a very good possibility Mike might eat him for breakfast.  You see, the Idiot Jerk, in his supreme idiocy, focused all of his attention on Joe Biden.
Posted by Dave R at 6:35 AM