Since 1962 (a long time ago) Citizen Kane has been considered the best movie of all time.  In this classic, Orson Welles made cinematic history with innovative camera shots, unconventional story telling, and set a precedent by thinly veiling an unauthorized biography of William Randolph Hearst.  Over the years, however, other films have slowly inched their way either up or down that ladder; time always tells.  Now, Citizen Kane has been knocked down a rung and finds itself in the number two position.  What replaced it?  Alfred Hitchcock's Vertigo. 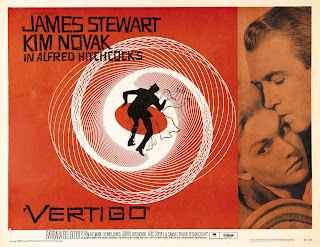 I have to say I am in full agreement.  While I've liked Citizen Kane and have seen it 3 or 4 times I have always seen it as a demonstration of innovative genius rather then cinematic genius.  Vertigo, on the other hand, has fascinated me ever since I saw it on TV as a child.  Back then I thought it was just "wow" without any understanding of the psychology involved.  In my twenties, I watched it again and realized it was not just about one man's fear of heights.  I began understanding the psychology involved.  The word "obsession" began entering my vocabulary when I talked about it with friends, while we postulated the differences between obsession and mental illness since this film is about both.  I watched it again a few years ago and must say there are times in it when I felt truly uncomfortable most especially the scene where James Stewart dresses up Kim Novak as the dead Madeleine. 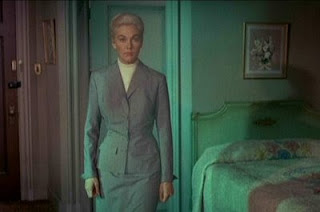 This scene creeped me out so badly I almost got up and walked out the room because at that moment  I realized just how crazy James Stewart's Scottie had become and like the police officer who falls to his death in the beginning, Scottie has stepped off the roof of reality.