I was just watching CNBC where they were discussing what the conversation would be a cocktail parties this evening.  One of the commentators asked a Guest Idiot "if you're at a cocktail party this evening and your 401K goes up $10,000 are you really going to be talking about volume?"  And of course the Guest Idiot said, "most certainly."  How out of touch with reality is this guy?  Doesn't he know 99% of all Americans are not going to cocktail parties this evening?  He's making a generalization that most people are like him, and I sure he will be discussing volume.  By far, the vast majority only pay attention to their 401k's when they get their quarterly statements, unless the market drops, then they may go online to see how much they've lost.  He needs to understand the audience of CNBC is miniscule which, in an odd sort of way, may give his idiocy some minor credibility, but not much.  What he really needs to be is a little less presumptive in his comments and qualify them with statements such as "of those 1% of Americans going to cocktail parties this evening, a large proportion will be talking about the volume of the 401k's."  Of course, that will never happen.

On to the phone whores.  Prior to turning on CNBC I went to my local supermarket.  Walking towards the dairy section I saw a well dressed young woman talking on her cell phone.  Normally, this is not unusual, this afternoon it was.  Her conversation was very personal, I could tell because she was staring into the corner of a meat cooler, her back turned towards her shopping.  This was bad because trying to stand up on the seat of that grocery cart was a two year old girl.  What kind of mother turns her back on her children?  I say children because 8 feet away her son, about 5 years old, was bouncing a large red ball he'd pulled from a toy bin.  Passing her I said, "you need to keep you eye on her."  Her response was to smile at me as though I was some fool.  I was going to make a smart ass comment something like, "don't you think you should be a mother first and a phone whore second?"  I didn't because I knew that would make her angry and she'd most likely take that anger out on the kids.  Unfortunately she is a phone whore because she was more concerned with the person on the other end of the phone then she was her own children.  We've all seen people like this, who fail to comprehend that their phone is a tool, not an added limb.  They rely on peripheral vision to get them around safely because their eyes have been hypnotized by the phone in their hand. 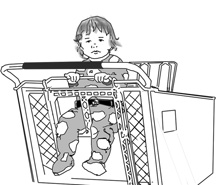