Yesterday and American swimmer became the most decorated Olympian of all time, of course, everybody knows who Michael Phelps is and they have for years.  I remember back when a photo of him surfaced taking a hit from a bong and the out cry was immense - from people who sit around with self-righteous sticks stuck up their asses.  They did not want a human being representing the United States, they wanted a robot, some one who aspired to demonstrate the qualities they choose.  I suppose they believe they are striving towards perfection when in reality they want to strangle to death any aspect which imparts individualism.  They want a Stepford populated not just with perfect wives, but with perfect husbands and perfect children not realizing the only thing in their future is failure.  "Nature always wins out," Jeff Goldblum said that in Jurassic Park. You can take the human out of nature but you can't take the nature out of human, that's me. 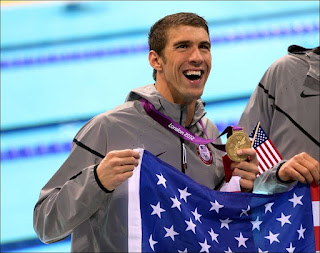 Here's a hearty congratulations to Mr. Phelps for becoming the most decorated Olympian of all time in spite of smoking a little pot.  It's also a finger shake at all those boo hissers - don't you just love being wrong.