As far as I can see, the biggest controversy coming out of the 2012 Olympics has got to be anything and everything dealing with Ryan Lochte.  While you would like to put a positive spin on what he and his family are saying and doing, they are up against Michael Phelps who is definetly the kind of ambassador America wants to send to the Olympics.  Phelps is well spoken, sounding educated and he shakes the hands of his team members even when he comes in second, Lochte doesn't.  The fact that Lochte needs to be told not to wear his grill on to the podium is an embarrasment.  He doesn't seem to understand the games are not held to show the world he is 'cool.'  I've seen him interviews and he can not help he sounds like Rocky Balboa, but he needs to learn to conjugate his verbs when speaking in public.  He needs to say "Michael Phelps and I are," not Michael Phelps and I is."  One can only wonder if he wants to sound stupid on purpose; maybe that's part of the 'cool' thing. 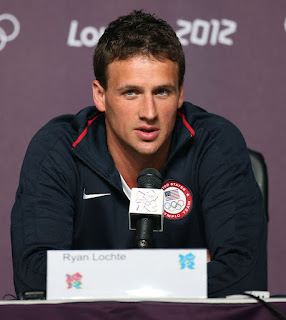 Do a search on his name, pull of the article and start reading, even those most positive mention the negative aspects of his personality.  His mother doesn't help.  When I read in a sports headline that she had said his schedule only allows for him to have one night stands I was flabbergasted.  She's dumb as a box of bricks and perhaps the apple didn't fall far from the tree.  Evidently he's been trying to backtrack from that comment, his lifestyle up until a few days ago will limit just how far he can go.  Maybe what he really needs to do is pop his grill in his mouth and grin because maybe he wants to be remembered as a douchebag.